Michael James was born in 1949 in New Bedford, Massachusetts, the oldest of seven children born to Claire Savoie James and Robert A. James Jr., who were English and French-Canadian heritage.  As a young child, Michael attended a French/English bilingual parish school, St. Anthony’s in New Bedford.  He studied painting and printmaking at Southeastern Massachusetts University, and later moved to Rochester, New York, for graduate studies in painting and printmaking at the Rochester Institute of Technology.  In 1972, he married Judith Dionne; they have one son, Trevor.

In 1973, Michael completed his M.F.A but ceased painting a few months after graduation.  He had begun studying quilt history and techniques, and by late summer he exchanged paintbrush for needle and thread.  His first exposure to Amish quilts was at a lecture by Jonathan Holstein at the Memorial Art Gallery of the University of Rochester in January 1974.

With his young family, Michael moved back to his boyhood home and began substitute teaching for his former high school art teacher.  He also began to teach quiltmaking at adult education workshops throughout southeastern New England. By 1974, Michael had completed his first hand-pieced and hand-quilted full-size quilt, Meadow Lily.  But he spent relatively little time with traditional quilt patterns before exploring and successfully producing what are know today as art quilts.

Michael James quickly master the techniques necessary for precision in quiltmaking, which became a hallmark of his work.  These skills have been carefully articulated n the books he has written, The Quiltmaker’s Handbook: A Guide to Design and Construction (1978) and The Second Quiltmaker’s Handbook: Creative Approaches to Contemporary Quilt Design (1981).In 1975, while teaching at the DeCordova Museum School in Lincoln, Massachusetts, he participated in the museum’s exhibition Bed and Board: Quilts and Woodwork, one of the first nontraditional quilt exhibitions in the country.  In 1976, his quilts were also part of the exhibition Quilts for ‘76in the Cyclorama Building of the Boston Center for the Arts.  In 1976, Michael attended a quilt conference held in Ithaca, New York, where he met Beth Gutcheon, Jeffrey Gutcheon, Bonnie Leman, Jean Ray Laury, and Myron and Patsy Orlofsky.

In 1977, Michael began to teach quiltmaking throughout the United States and Canada, and trips to England (in 1980) and France and Switzerland (in 1983) soon followed.  He first solo exhibition of quilts, organized by Bridgewater (Massachusetts) State College, included Night Sky 1, Razzle Dazzle and Tossed Salad, among other works.  He was awarded a Visual Artists Fellowship in Crafts by the National Endowment for the Arts (NEA) in 1978 and soon after moved into his new home studio in Somerset Village, Massachusetts, which more than tripled his workspace.  He also received his first corporate commission and created The Seasons for the Waltham Federal Savings and Load Association in the late 1970’s.

In the mid-1980’s, he made a series of quilts based on musical and dance motifs (the Rhythm/Color series). He then began working with radical angles and more color/light exploration, advancing far from the earlier grid patterns. Swirls and waves with a strong sense of movement dominated is work.  His style was further enhanced by experiences gathered in his travels, and he also drew inspiration from the natural world.

At the invitation of Nihon Vogue, Michael visited japan for the first time in 1990, giving lectures and workshops both in Tokyo and Osaka.  Later that year, as a beneficiary of an NEA U.S.A./France Exchange fellowship, he traveled to La Napoule, France, to join five Europeans and ten Americans as artists in residence at the La Napoule Art Foundation.  During his residency, he worked exclusively on paper, completing a series of oil pastel drawings that eventually let him to a major breakthrough in his quilt work.

The University of Massachusetts (Dartmouth, formerly Southeastern Massachusetts University), Michael James’ alma mater, awarded him an honorary doctor of fine arts degree in 1992.  His induction into the Quilters Hall of Fame followed in1993, along with more international travel, including trips to Florence, Italy, and Barcelona, Spain.  The Smithsonian Institution acquired Quilt No 150: Rehoboth Meander in 1994.  This was also the year he received the first biennial Society of Arts and Crafts Award in Boston.

The early 1990’s was a very prolific period for the artist, who introduced curved forms with angles into his work.  Lush Life is regarded as a turning point for Michael, with a look back into his interest in biomorphic forms and ahead to the expressiveness of his more recent work.

While in Oslo, Norway, Michael was inspired by a sixteenth-century Russian icon with a simple but intriguing black-and-white geometric pattern, and not long after, Ikon was completed and exhibited in Quilt National 1997.

Two of Michael’s quilts, Aurora (1978) and Rhythm/Color: Improvisation (1985), were selected for the America’s 100 Best Quilts of the 20th Century.  In the catalog entry for Rhythm/Color: Improvisation, Alyson B. Stanfield stated, “His mature work…is completely abstract and is characterized by exhaustive study of color relationships.  Minute differences in ton and value appear to be the subject”

Since the organization’s founding in 1997, Michael has worked closely with the International Quilt study Center, beginning as an adviser.  In 2000, Michael left his longtime home in Massachusetts to assume a position as senior lecturer at the University of Nebraska-Lincoln, in its Department of Textiles, Clothing and Design, the parent department of the international Quilt Study Center and Museum.  He was granted tenure as the Ardis James Professor of Textiles, Clothing and Design in the College of Education and Human Sciences in 2003.  Two years later, he assumed the position of department chair and currently continues to hold an administrative appointment.

He Co-chaired the international Quilt Study Center’s first symposium, “Wild by Design,” in 2003.  The year 2003 also brought a tremendous change in Michael’s quilts, a change largely due to his increasing ability to successfully use sophisticated design software like Adobe Photoshop and Adobe Illustrator.  In a feature article he wrote titled “The Digital Quilt” for Fiberarts Contemporary Textile Art and Craft Magazine (November/December 2003), he further explained:

The capacity to place imagery on fabric is virtually unlimited.  Almost anything that the imagination can conceive, combined with the facility offered by layering, transparency, tiling, color reduction, filtering, and other digital options, as well as photography and all that this medium brings to visual expression is doable.  This aforementioned facility doesn’t come easily, but once the basics of the CAD programs are mastered, experimentation will open endless avenue for creative exploration.  The danger is that this work can easily become facile, leading to vapid or predictable photo montages with little meaning of emotional resonance.  This is a problem not unique to digital quilts, of course.  It’s a concern in any medium and any material or process.

In 2005 and 2006, Michael spent time preparing for two major exhibits, including creating some of his most ambitious work to date, made for his solo show at the Racine Art Museum in the winter of 2006.  Working with studio assistant Leah Sorensen-Hayes, he continued to develop new concepts using digital development and print media, and in 2008 showed a large group of new works, including the Daybook series, in The Life in a Day at Modern Arts Midwest in Lincoln, Nebraska.  In order for a piece to qualify as a Daybook quilt, in addition to following a prescribed geometric format that he configures, James determined that once he began working on a top, he would not leave the studio until it was completed.  Some went together effortlessly in as little as one hour; some took the better part of a studio day.  Each of these pieces is approximately thirty-eight inches by twenty-four inches.

In a statement from 2007 about the Daybook series, Michael wrote: “In any case, the individual results can be taken as reflections of my mood or my emotional/intellectual impulses as I composed the surface arrangement.  In this sense each of these works is an entry in a ‘Daybook’-tied to a specific date serving as a record of my relationship to my sources and my medium on the given day…. I refuse to insist on a singular meaning in any of these pieces as I know there are meaning lying within them that even I often fail to recognize.”

To be sure, advances in technology have had an enormous influence on Michael’s work in the first decade of the twenty-first century.  Many of these more recently completed quilts were exhibited at the following venues:   Fuller Craft Museum (Massachusetts, 2005), Racine Art Museum (Wisconsin 2006), La Linguella (Elba, Italy, 2006), Festival of Quilts (United Kingdom 2006), Seoul National University Museum of Arts (Republic of Korea, 2007), Modern Arts Midwest (Nebraska, 2008), and 15’eme Carrefour International du Patchwork (Alsace, France, 2009).

Michael James, current chair of the Department of Textiles, clothing and Design at the University of Nebraska-Lincoln, acknowledges the university for its strong support.  In his own words: “If I had to tr to satisfy the taste of the small number of collectors in the area of the nontraditional quilt, my work could not have been able to evolve as it has.  I have access to advanced technology that has allowed me to create a very different type of quilt, one who allegiances are cross-disciplinary and whose tendencies are progressive rather than conservative.  By definition, are is inventive and forward looking, and embraces experimentation and change.  I’ve always worked on this belief as an article of faith.  “While art the university he has also taught in the Visual Literacy Program, the foundation curriculum for all art, architecture, and design majors, and he regularly teaches courses for the graduate concentration in quilt studies, part of the textile history major.

Not only had Michael James created a distinctive and exception body of work in fiber art, he has also been a leader in fostering wider acceptance of nontraditional quilts.  His induction into the Quilters Hall of Fame in 1993 honored his many contributions to contemporary quiltmaking.  Without doubt, Michael continues to be a leader in the art-quilt movement, once expected to be short lived.  Michael James has proved this underestimation wrong time after time.

“In each of my quilts I attempt to chart some dimension of my own conscious and subconscious being.  They are as much about me as they are about formal phenomenon.” 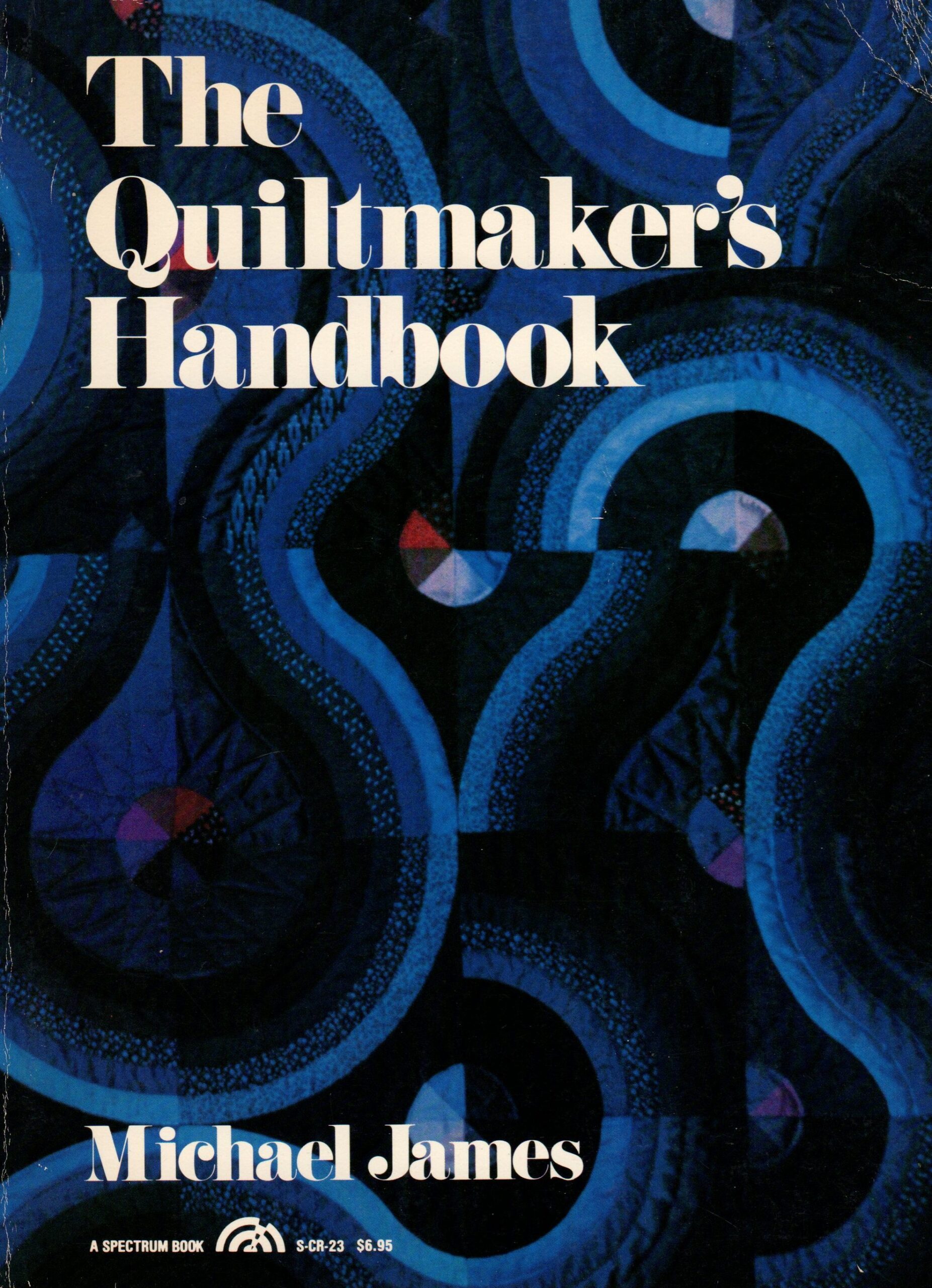 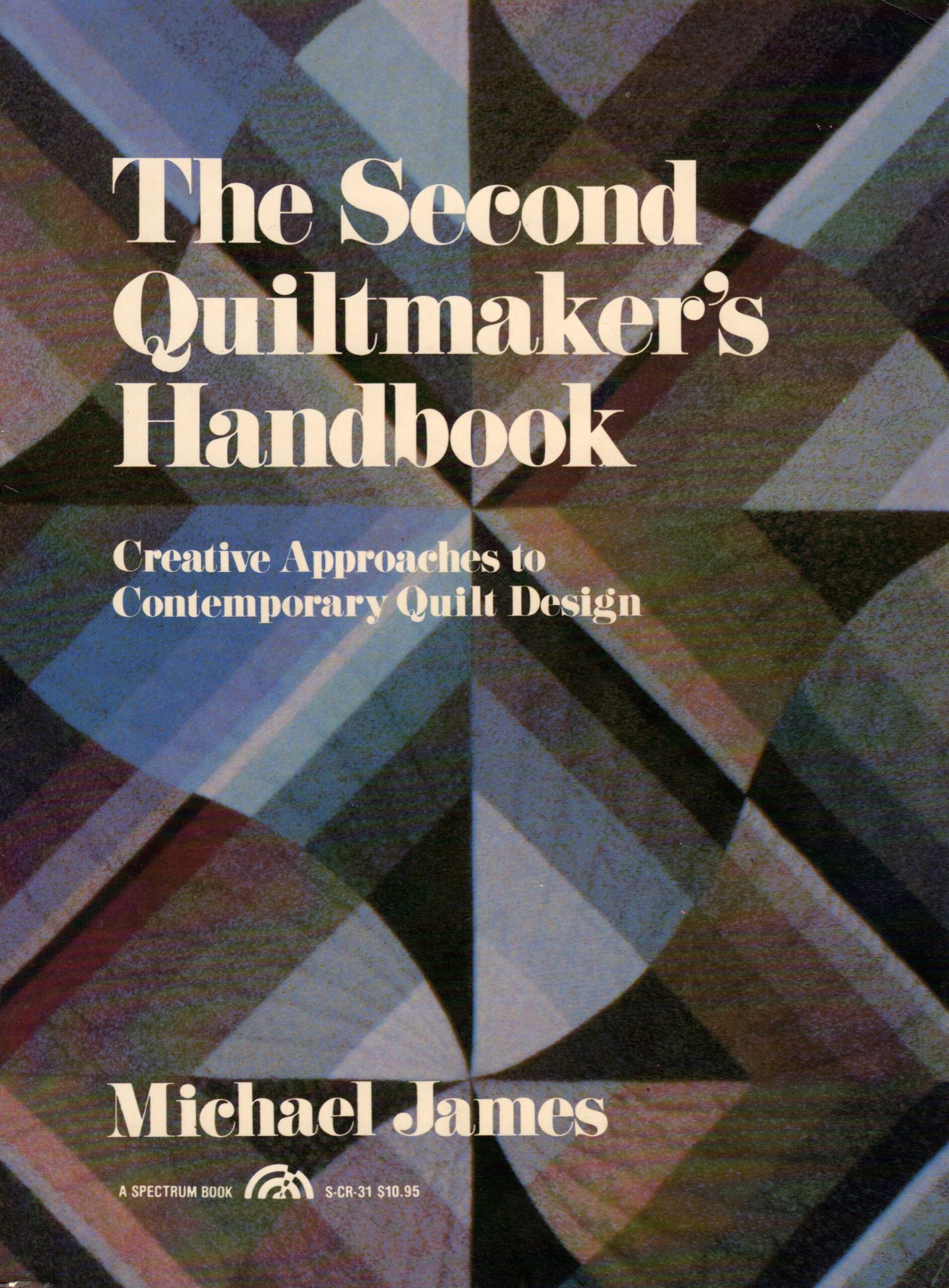 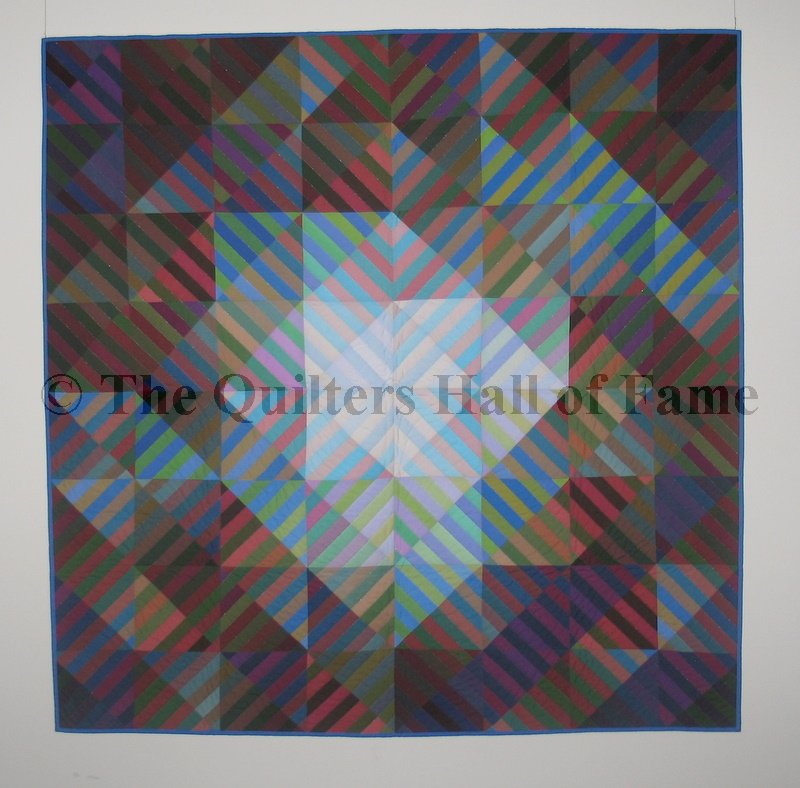 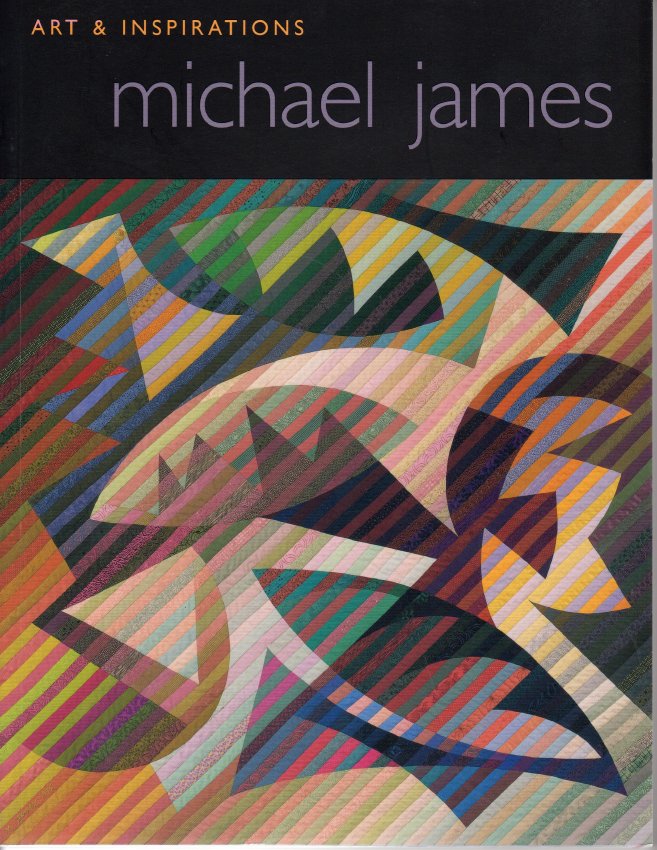 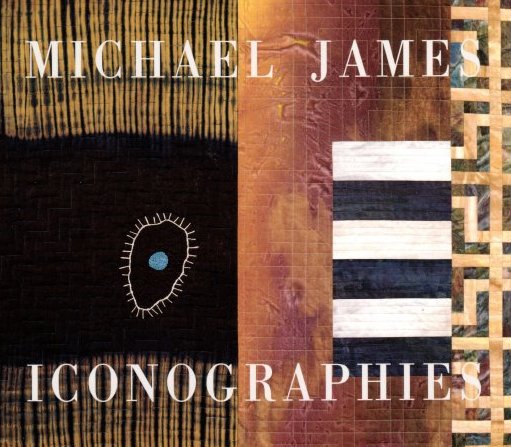 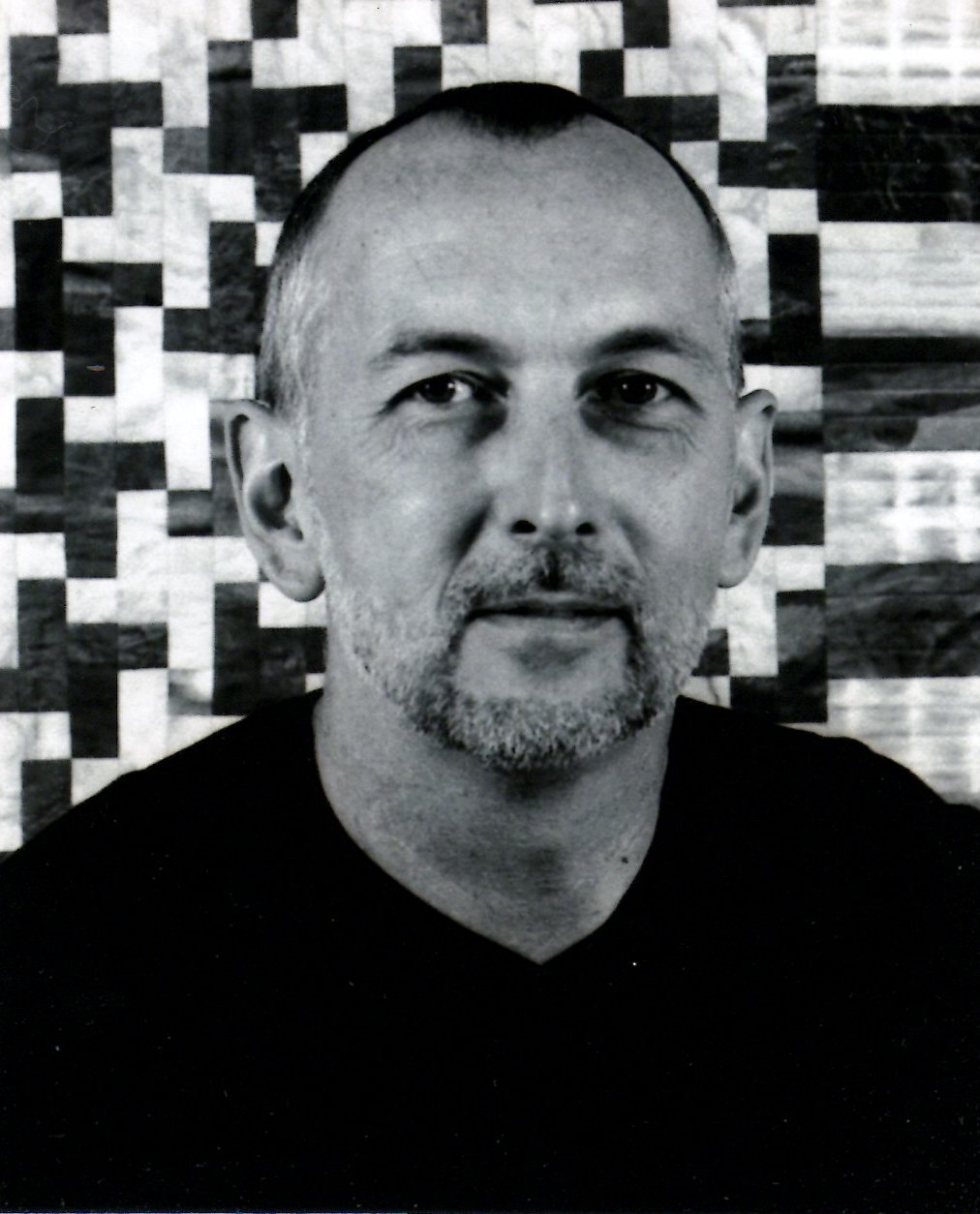