Averil Colby was the eldest of three girls and two boys, whose father was a North County doctor in Yorkshire, England.  As a young woman, she was educated at Cheltenham Ladies College in Gloucestershire and then studied horticulture at Studley Agricultural College in Warwickshire from about 1917 to 1920.  On leaving college, she teamed u with a fellow graduate and together they rented the Old Court House with forty acres in Somerset County in the West of England.  The small holding supported  a milk delivery route with a pony and cart and a butter-and cheese-making enterprise.

For about ten years, Averil enjoyed country life, transforming the Old Court House garden from a wilderness into a spectacle of great beauty.  In the early 1930’s there was a parting of the ways, and Averil moved to live with her widowed mother in North Devon and then Hampshire, but she yearned to return to the Old Court House.  Her brother Richard remembered, “She was never happier than when her fingers were delving in the earth tending her plants.”

Averil joined the local branch of the National Federation of Women’s Institutes, where she became involved in making a group quilt and quickly became hooked on patchwork.  Averil and patchwork were made for each other, as her natural flair and horticultural training has sharpened her designer’s eye.

After a short time, Averil returned to The Old Court House, the home she so dearly loved. With just a spell in the Women’s Land Army during the second World War, when she filled in for farmers who were off to war, she was able to spend the rest of her life in this much loved home.

Having set the stage, what of her as a person? Her stern Yorkshire upbringing meant that Miss Colby did not suffer fools gladly. She was immensely practical, full of common sense, and a marvelous cook. When her youngest brother stayed with her, they took it in turns to do the cooking, she teaching him.

She had a warm personality and enjoyed her many nieces and nephews, who had great affection for her, assuming the role of grandmother after her own mother died. She was fun to be with, a lively, energetic little lady who took her family completely by surprise when, nearly sixty, she took up writing. Batsford, a London publishing firm, asked her to write a book on patchwork, as up to then nothing had been published in such depth on the subject in England.

She was a tireless researcher and traveled throughout the country looking for material for her books. Her first book, Patchwork, published in 1958, described the early history of quilts. The use of all the geometric shapes, other patterns and different techniques of appliqué are discussed, as well as the importance of design and color placement in quilts. A chapter is given to finishing, in which she points out that “however well the patchwork is executed, the whole can be spoilt by a bad finish.” The illustrations of quilts dating back to 1708 were gathered from museums and private individuals. Since its publication, Patchwork has been reprinted many times.

Four other books by Averil Colby followed: Samplers (1964), Patchwork Quilts (1965), Quilting (1971), and Pincushions (1975). Patchwork Quilts included detailed documentation of thirty-three quilts, describing their origins and characteristics, with instructions. A reviewer of Patchwork Quilts in a British newspaper called Averil Colby “a Virtuoso of Patchwork” and “Britain’s main authority,” but “the odd thing is that once she could not sew, and even now she seems surprised by her own knowledge and finds it rather funny: ‘I’m really only a farmer, you see.'”

It is in her book Pincushions that her sense of humor is best shown. Her brother remembered, “she liked to sit in the evening, never still, always working at something and often suddenly a pincushion would materialize from scraps of fabric that were to hand.” Quite often departing guests would be presented with a pincushion which had been made while they sat and chatted.

Averil Colby was a meticulous worker and abhorred slovenly work. Although she maintained that she could not sew before she became “hooked” on quilts, excellence in needlework was part of a girl’s education in the days of her youth. Feeling that quilting is a craft demanding greater needle skills than she possessed, she never became a quilter. Her work, usually without batting, employed only a little quilting around some of the blocks to unite the two layers and invariably relied on discreet knotting.

She was empathetic that quilts were for use and should always be washable. Equally emphatically, the right fabric for the job was of great importance to her. The contents of her scrap bag spanned nearly 200 years, so that when she was asked to dress a nineteenth-century doll’s bed, she could use a fabric of the appropriate date and suitable small design.

Rosettes, swags, trails, and wreaths of flowers, all executed in hexagons, some as small as one-half inch across, are the hallmark of Averil Colby’s patchwork. Background also played a great part in her quilts. Instead of using a plain white background, she cut hexagons from a wide variety of white fabrics, such as dimities, piques, twills, and sateens to construct the background. This gave the finished quilt a vivacity and richness that was both subtle and extremely pleasing.

She might have remained an unknown enthusiast but for Muriel Rose, the Craft Officer to The British Council, who borrowed some of Averil’s work for an exhibition of English needlework to travel abroad. As well as promoting the work of leading craftsmen and women, Muriel Rose was instrumental in revitalizing patchwork and quilting in Wales. Orders were taken at her shop and passed through the Rural Industries Bureau to the Welsh quilt makers. It is thought that Averil executed designs for several of these orders.

She was a frequent visitor to the American Museum in Britain at Bath, to evaluate quilts new to the Museum’s collection or to research quilts for one of her books. Honoree Shiela Betterton, until recently the Keeper of Textiles at the museum, was Averil’s friend for many years.

Averil Colby remained a faithful member of the Women’s Institute, working diligently at local and district levels to promote patchwork and quilting crafts. From 1956 to 1961, she was Chairman of the Handicrafts Committee, where she arranged classes and organized exhibitions on a national scale. With her substantial designing ability and very high standard of execution skills, she made an excellent judge.

In 1979, Averil Colby was named the first honorary member of The Quilters’ Guild of the British Isles and was inducted into The Quilters Hall of Fame in 1980. She kept the engraved box which she had received when inducted on a table beside her favorite chair, with her cat Hobo, a one time stray who had somehow lost his tail, sitting nearby. She died just three week short of her eighty-third birthday, on January 5, 1983.

“Possibly this book may be the means of finding unknown work… and perhaps the patterns, and in many cases the humour,, of the best work we possess may stimulate the present generation to do likewise for the future ones. I hope so.” 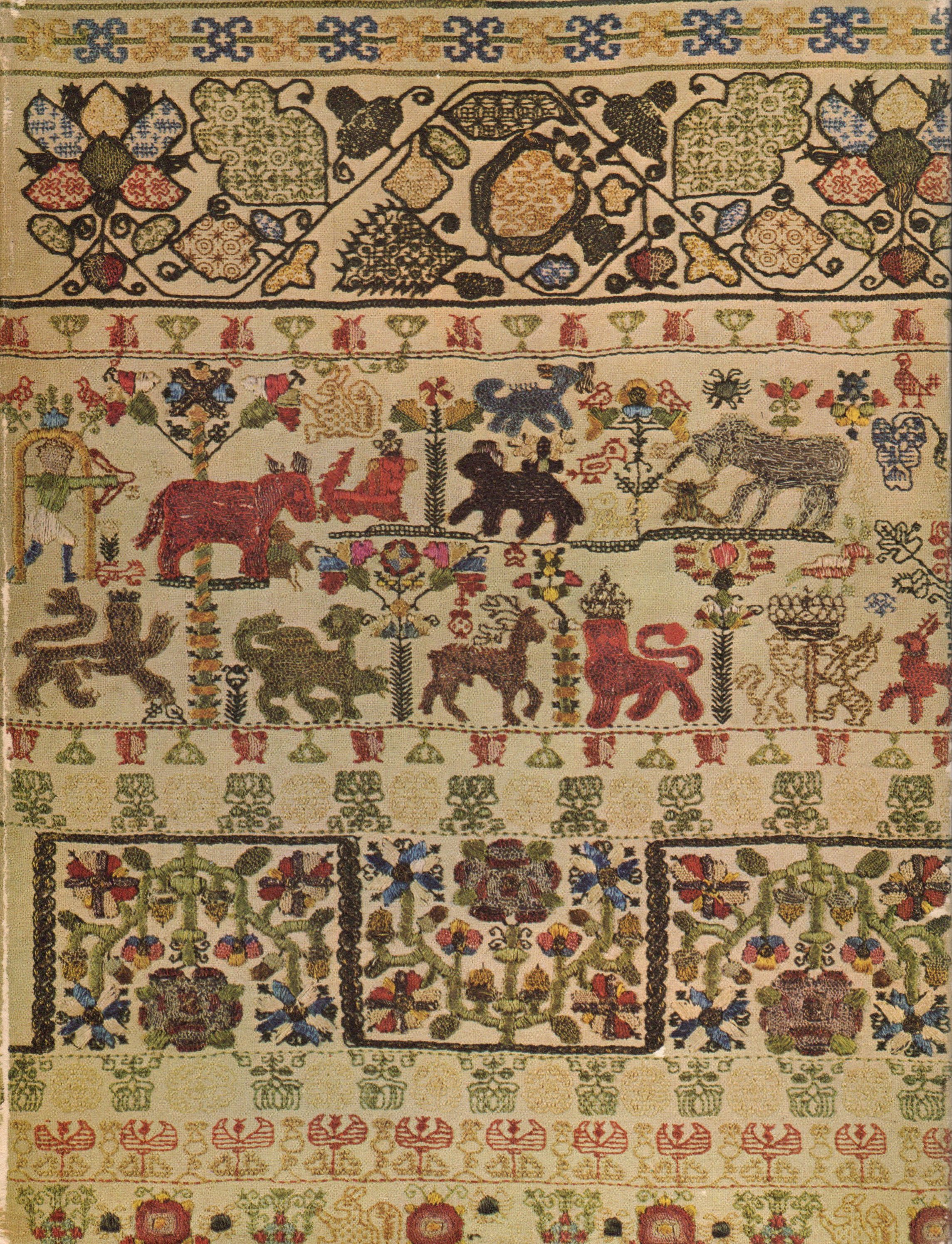 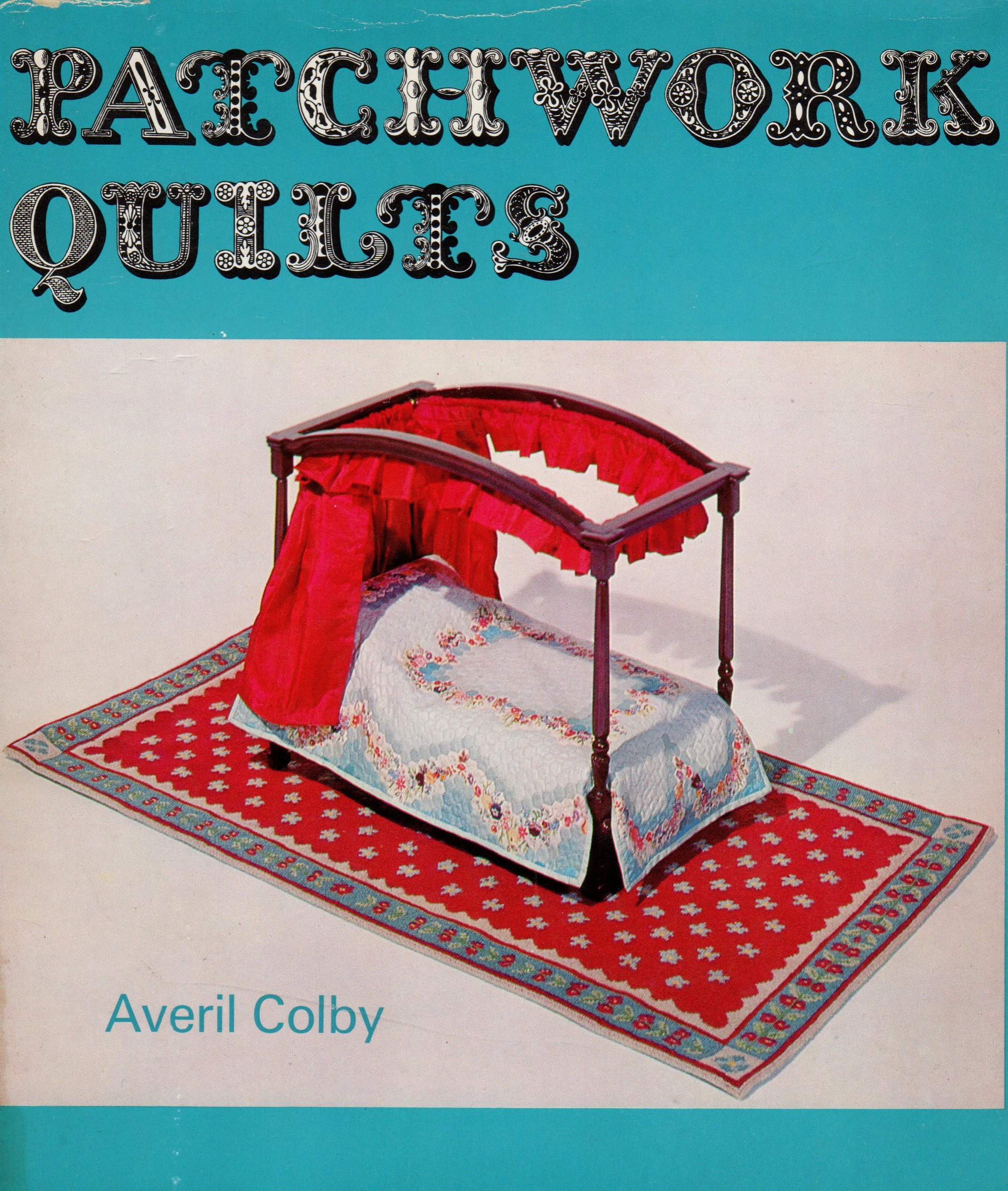 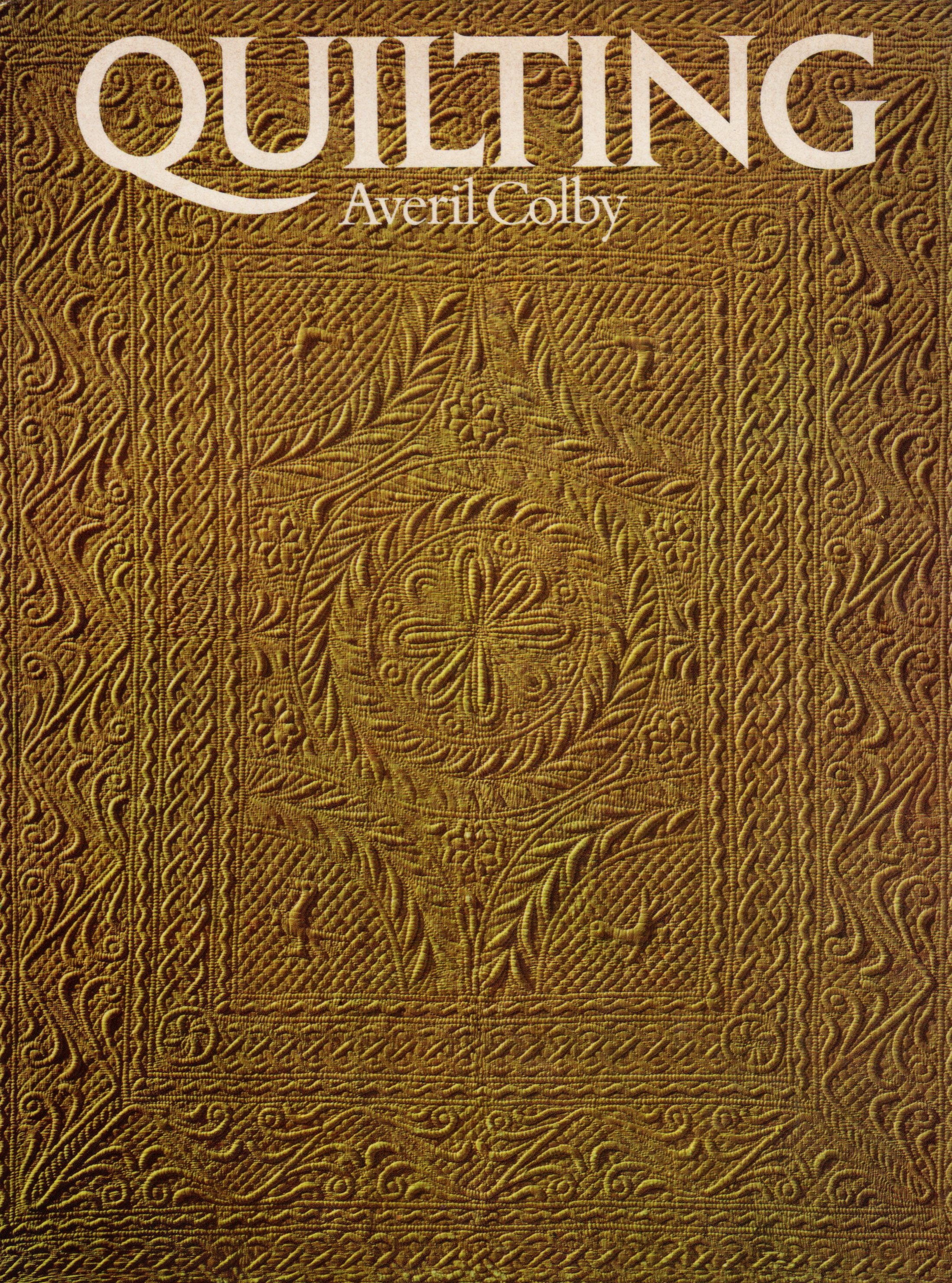 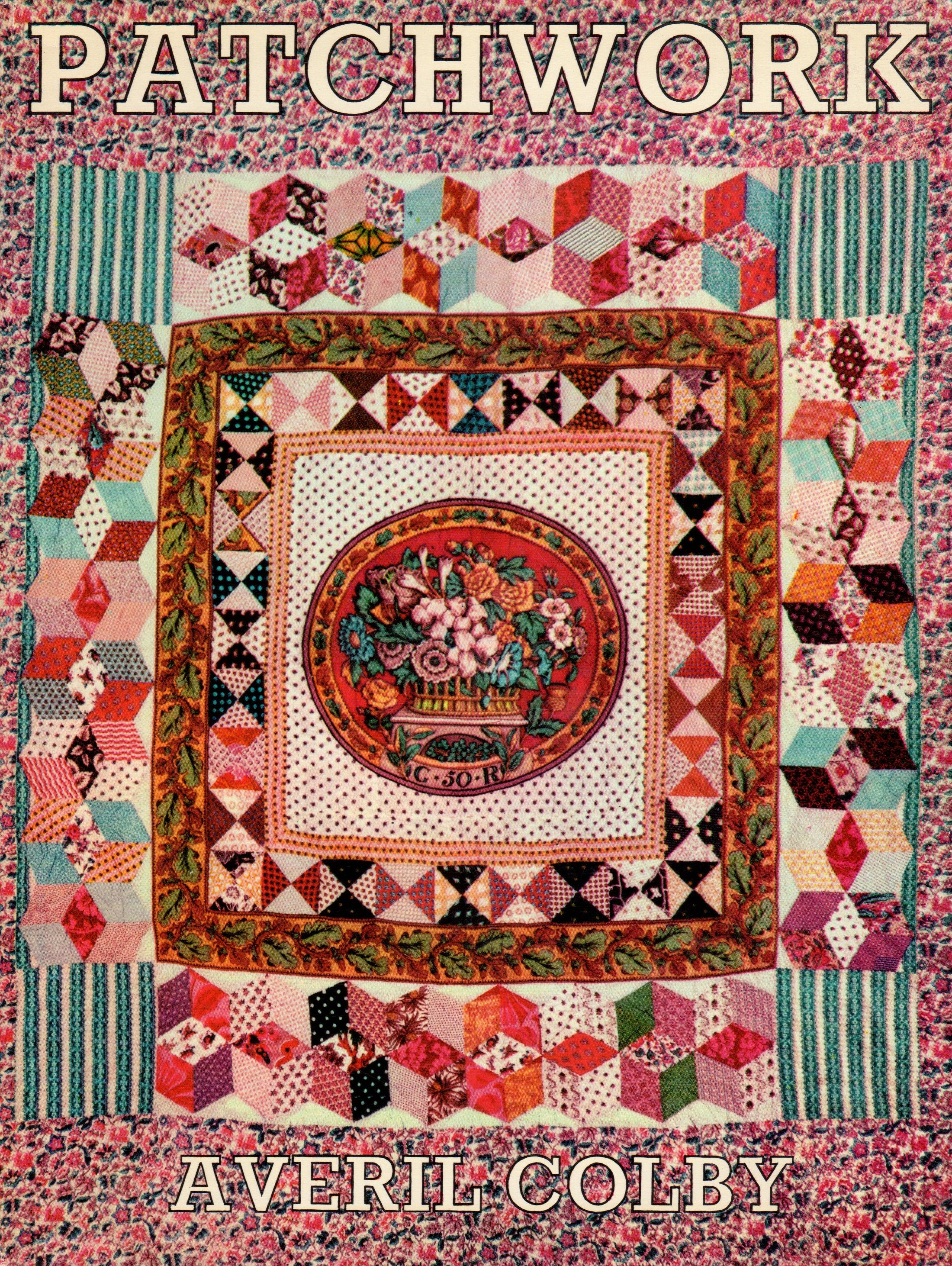 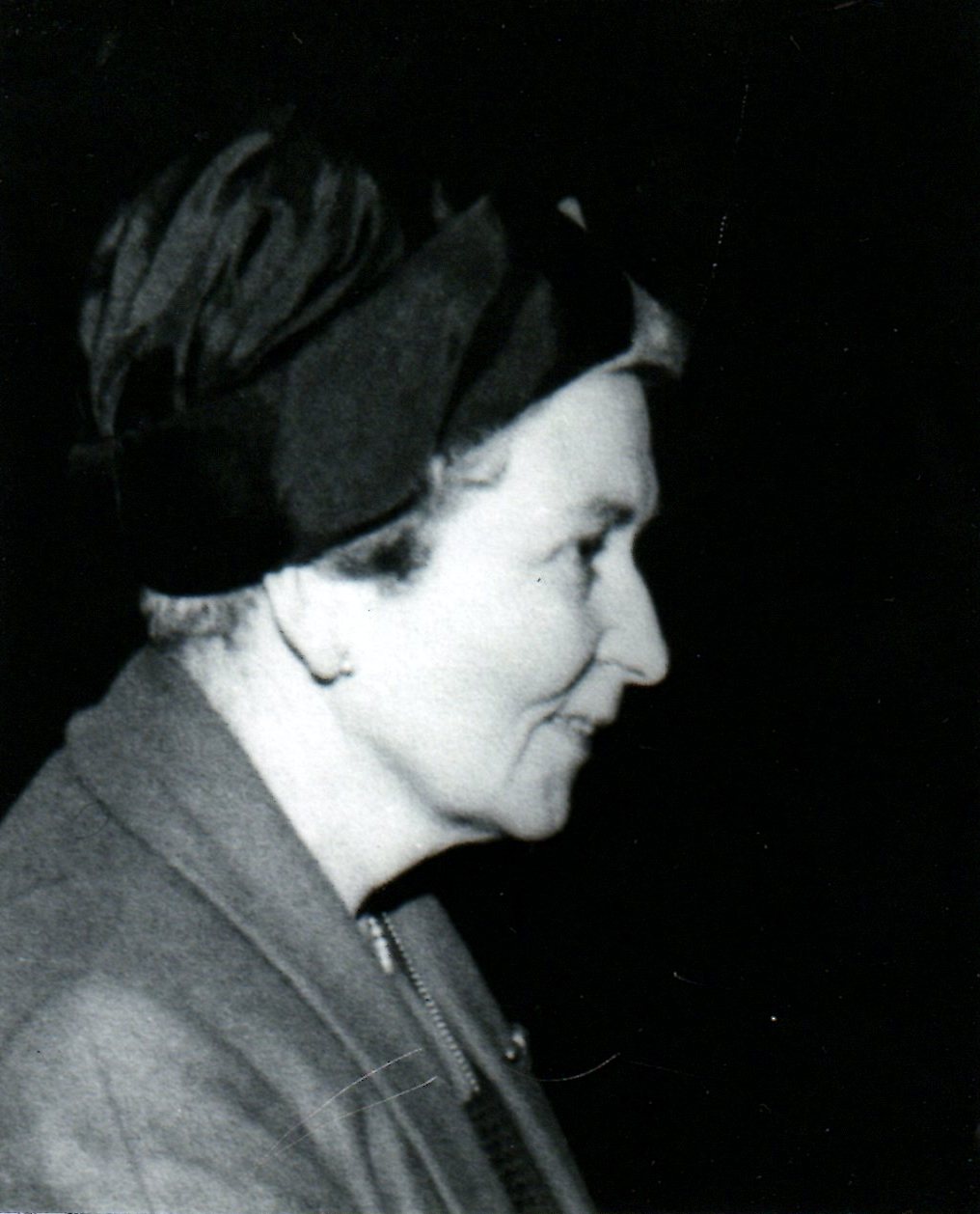