In 1889, when Grace McCance was a seven-year-old girl living on the Nebraska plains, her dreams seemed impossible, and yet they were all fulfilled. Her family had spent the past four years living in a sod house, miles from neighbors in western Nebraska. Grace was the second oldest in a family of nine children. Even after her marriage, Grace continued to live in other “soddies.” The isolation and hardships of pioneer life challenged Grace Snyder, but failed to stop her. Through it all, she never gave up her dreams.

Her dream of marrying a cowboy came true when A.B. Snyder (also known as “Pinnacle Jack” or “Bert”) claimed her heart in 1903. They had four children, born between 1905 and 1914: Nellie, Miles, Billie, and Bertie.

Her dream of “looking down on the top of a cloud” was surprisingly easy to fulfill. Airplane travel increased rapidly during the first half o the twentieth century. Her grown son even owned a small plane to check cattle and transport supplies near their home of Tryon, Nebraska, where roads were few. Later, commercial airliners carried Grace and her prize-winning quilts to New York City and Springfield, Massachusetts, where Grace’s expert needlework brought her national fame.

Grace’s autobiography, No Time on My Hands, co-authored by her daughter, Nellie Snyder Yost, includes details of her life, from her birth in Missouri and move to Nebraska at the age of three, to her courtship and marriage to Bert Snyder, the birth of their children, routine daily activities, even the influence of the weather on cattle-feeding, quilting, and visiting with neighbors. It begins with the refining influence of Grace’s mother, Margaret Blaine McCance, and her “tiny quick stitches.” Grace learned from her appreciation for “nice things” and her efforts to make her sod homes as comfortable as possible.

Grace McCance’s quilt practice began early. Shortly after the six-year-old girl began herding the family cattle, she asked for scraps to piece into a little Four Patch quilt for her doll, promising to make her stitches neat and even “so Mama would let me have more pieces.”

Quilts appear throughout her life story because of their importance in warming people, animals and even family cars. During her first job, as a teacher in 1901, she quilted while snowed in for months at a time. This quilt, the first she made from store-bought fabric rather than scraps, alter decorated Grace and Bert Snyder’s first sod home.

The U.S. mail helped Grace build and maintain a social network in spite of her physical isolation. Grace ordered a sewing machine through the mail four years after she married Bert. In 1917, she became the post mistress for Lilac, Nebraska, where four families picked up their mail from a cracker box, and a telephone line finally reached Snyder ranch.

While Grace always attempted to stitch the finest quilts possible, a move to Salem, Oregon, in 1927 to find better schools for her two youngest children, freed her from the daily chores of a busy ranch family and allowed her to spend more time making quilts. During her five years in Oregon, Bert’s sister Alice invited Grace to join her neighborhood quilting club. Grace wrote to Nellie, who had returned to Nebraska, that she made Sawtooth, Double Wedding Ring, Log Cabin and Necktie quilts.

After her children grew up and left home, Grace would drive the car for her husband when he worked in the fields or fished. She pieced some of her finest quilts on these trips with Bert. According to Nellie, “she then began to vision a large collection of outstanding quilts… and, toward that end, began to study old quilts and quilt history.” In the 1930s, she completed many quilts, including Windblown Tulip (a Marie Webster design), Mrs. McGill’s Cherries and the Lincoln Quilt, based on a quilt made by Abraham Lincoln’s mother.

She became interested in making quilts with thousands of tiny pieces when she saw a photo of prize-winning quiltmaker Albert Small’s Mosaic Hexagon quilt, with each piece the size of a dime. Grace’s own version, made about 1941, won many prizes.

Grace Snyder’s most famous quilt is undoubtedly her Flower Basket Petit Point, which was selected as one of “The 20th Century’s 100 Best American Quilts” (Plate 30). She was inspired by a plate made by the Salem China Company, with a design based on a needlepoint picture. Grace translated the design into one-inch blocks, each made up of six to eight pieces, to give the needlepoint effect. She set up thirteen pieced baskets on point, surrounded by an elaborate rose vine boarder. According to her autobiography, she spent sixteen months in 1942 and 1943 designing, cutting, and piecing the quilt, which contained more than 85,000 tiny pieces.

In her epilogue to No Time on My Hands, daughter Nellie Snyder Yost wrote that Grace also used a dish design for her Bird of Paradise quilt, and granddaughter Josee Forell recalled Grace sketching a tiger lily from her garden for the Tiger Lily Quilt. In the 1940s, Grace’s Semi-Circle Saw and Return of the Swallows quilt pattern appeared in the Kansas City Star. She made her lovely Appliqué Grapes in 1951. Princess Feather was her last quilt, completed in 1953, when cataracts began in seriously affect her vision.

Grace Snyder found herself in a budding national quilt network and entered her “show quilts” in many exhibitions. In 1944, her Flower Basket Petit Point quilt won the sweepstakes award at the Nebraska State Fair, while her Mosaic Hexagon and Covered Wagon States quilts both won blue ribbons. She won “a fistful of top ribbons” at the International Women’s Exhibition in New York in 1950, judged by future Honoree Florence Peto, and sent her Flower Basket Petit Point quilt to the Eastern States Exposition at Storrowton in Massachusetts.

In 1973, the Stuhr Museum of the Prairie Pioneer in Grand Island, Nebraska, produced a slide presentation titled “The Three Dreams of Grace McCance Snyder” in conjunction with an exhibit of her prized quilts. At the age of ninety-one, Grace Snyder beamed with pride as she answered the question, “How could an isolated pioneer woman achieve these three impossible dreams?”

Grace closed her autobiography with a reference to “all of my big wishes come true.” Mary Ghormley, a Nebraska quilt collector who visited Grace in the 1970s, remembers how Grace caressed each quilt as Nellie folded back the one on top of it. She touched each quilt like a “beloved child.” Grace McCance Snyder loved her cowboy, the clouds and her quilts.

“I wished that I might grow up to make the most beautiful quilts in the world, to marry a cowboy, and to look down on the top of a cloud.” 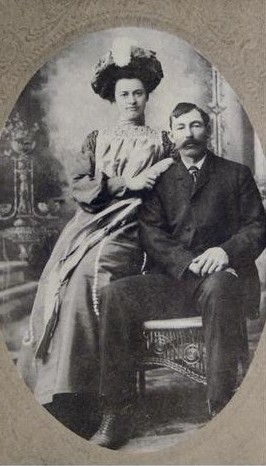 Grace Snyder is shown holding the engraved box commemorating her induction into The Quilters Hall of Fame in October 1980. Her daughter, Nellie Yost, wrote to President Hazel Carter: “Mother is so proud of her lovely box, and we are all proud of her and her award. It is, indeed, an honor… She said to me, ‘I’m so glad I lived to see this.'” 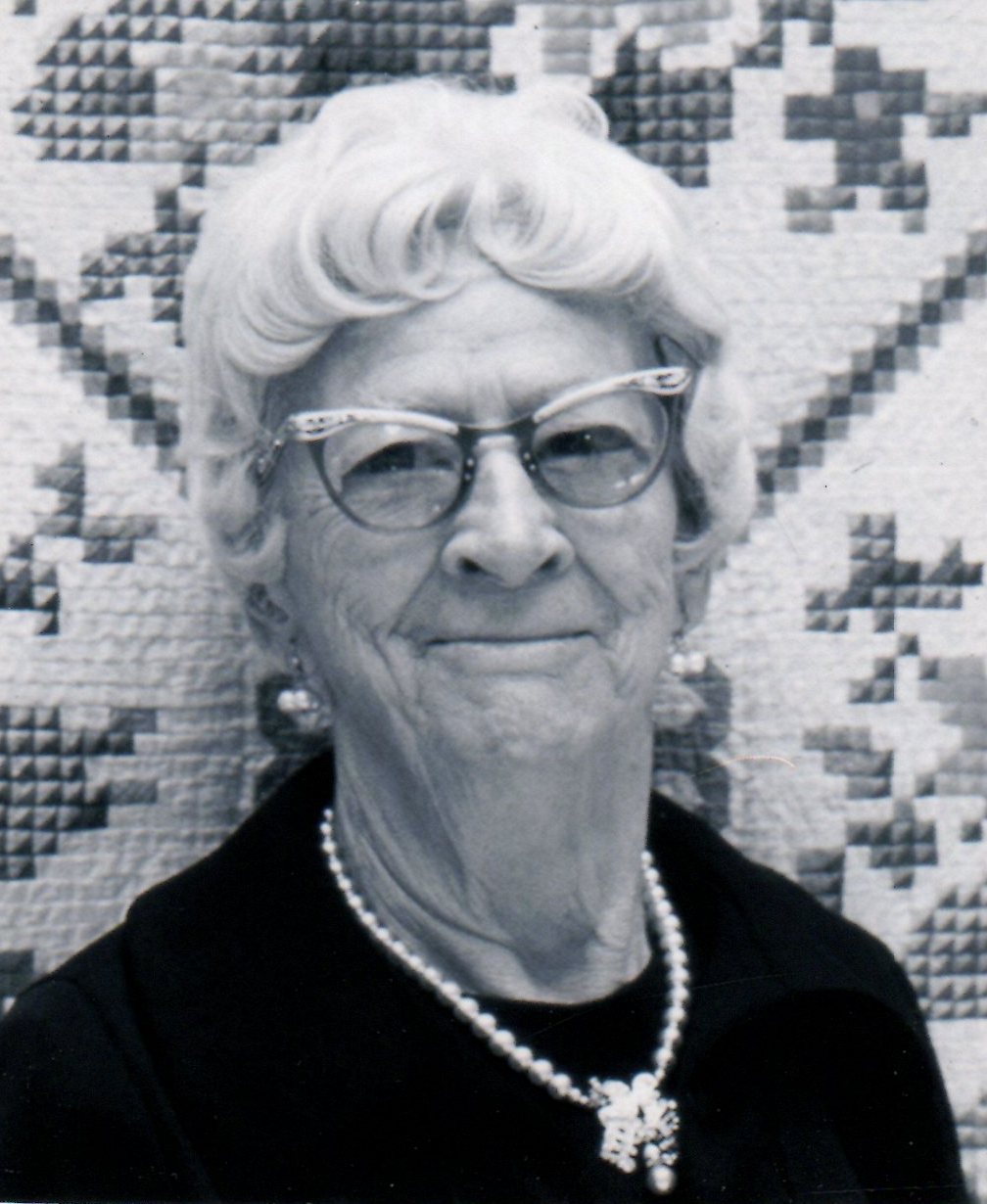