JOYCE RICHARDSON GROSS is known as a quilt researcher; teacher; lecturer; editor; publisher; collector of quilts, books, and ephemera; curator; and most recently as a quilt “legend”.  In 1969, when she first became involved with quilts, she brought to that endeavor the vision, enthusiasm, and drive that she had displayed throughout her life as a student activist, boutique owner, school board member, and political campaign manager.  As a result of these traits, the history of quilts and the lives of many early twentieth-century quiltmakers have been preserved for others to study and enjoy.

Born in Alameda, California, Joyce graduated with a B.A. in History from the University of California at Berkeley, where she was the first woman manager of the student newspaper.  In 1947, she married Edmond Gross, as commercial artist, and they had three children.  She also worked for Well Fargo Bank, managing their magazine and creating historical window displays, which proved to be good preparation for her future work as editor, publisher, and exhibit curator.

How did Joyce become so interested in quilts?  She has an early recollection of buying ten cents’ worth of blue percale at J.C. Penney’s for her grandmother, who was piecing a quilt.  Later, while visiting the historic houses and inn of Boston in 1945, antique quilts caught her attention, and she even inherited some family quilts.  However, her entry into the world of quilts was one of those events that some people simply call fate.

In 1969, a group of four women in Mill Valley, California, including Joyce and Salle Garoutte (the Quilters Hall of Fame 1994 honoree), frequently worked together on important local school and civic issues.  During their weekly meetings, they decided to make an embroidered quilt as a fund-raiser and greatly enjoyed the friendships that developed around the quilting fame.

This group evolved into the Mill Valley Quilt Authority (MVQ), which would make significant contributions to the nationwide quilting renaissance.  Throughout the 1970s, under Joyce’s leadership, the MVQA would product several important exhibitions in California including four landmark Patch in Time exhibitions.  Joyce developed an artists’ series and brought many quiltmakers and quilt historians of note, such as Lenice Bacon, Myron and Patsy Orlofsky, Deborah Kakalia, Michael James, Nancy Halpern, and Jinny Beyer to lecture and teach in California.  She also organized the first quilt study tours to other parts of the country and developed quilt history study centers at major quilt conferences throughout the United States.

Seeking to learn all she could about quilts, Joyce looked for books and magazines on the subject and soon had acquired The Romance of the Patchwork Quilt in America by Carrie A. Hall and Rose G. Kretsinger.  From this book, she discovered that Rose Kretsinger’s quilts had been given to the Thayer Museum of Art (now the Spencer Museum of Art) at the University of Kansas.  When she learned about an upcoming exhibition of the museum’s collection, she was on her way.

At the museum in Lawrence, Kansas, she saw quilts hung for the first time.  Joyce’s own words say it all: “As I rounded the corner, my eyes fell upon a quilt unlike any that I had ever seen.  It was Rose Kretsinger’s Paradise Garden in clear, bright colors.  It was beautifully designed and executed.  I had never seen stuffed work and as you may know, it is used most effectively in that quilt.  Beside Paradise Garden was Kretsinger’s Calendula.  To this day, they are two of my favorite quilts.”

From Kansas, Joyce went on to see the quilt collections at the Art Institute of Chicago and the Denver Art Museum.  She became intrigued wit these wonderful quilts and decided she had to share them with her quilt friends.  Joyce asked to have some of the quilts she had viewed sent to California for two exhibitions she was organizing.  Both the Denver Art Museum and the University of Kansas agreed to send quilts.  They were displayed from Jun 4 through July 12, 1973, at The American Quilt exhibit at the Bank of America World Headquarters building in San Francisco.  The curator of art for the corporation wrote in a letter to Joyce, “We estimate that nearly 10,000 people per day passed through our grand plaza to look and marvel at the quilts on exhibit.”

Much to Joyce’s dismay, when she asked for information about the women who had created these masterpieces, the museums had little information.  It seemed unbelievable to her that even such basic facts as their birth dates and birthplaces were unknown.  Thus was launched Joyce’s fascinating and fruitful search for information about quilts and quiltmakers that continues to this day.

Joyce has often said the telephone is a “favorite friend,” and she used it to advantage while searching for information about the quiltmakers.  She contacted relatives, friends, and, when possible, the quiltmakers themselves.  She interviewed everyone she could identify as being connected with the quiltmaker, and they often shared with her their scrapbooks and correspondence as well as the recollections.  Had it not been for her interest at the time when these items were still available, although not always considered meaningful or valuable, this important history might have been lost to researchers forever.

In September 1977, Joyce founded Quilters’ Journal to provide a vehicle for dissemination for the growing body of research about quilts and quiltmakers.  For ten years she served as publisher and editor of the Journal, which became an often-quoted source of scholarly quilt research and a standard entry in the bibliographies of other quilt-related articles and books.  Through its pages, the histories as well as the quilts of such notable women as Jinny Beyer, Rose Kretsinger, Jean Ray Laury, Florence Peto, Bertha Stenge, Electra Havermeyer Webb, and many others were brought to life.

In November 1980, Sally Garoutte made history by organizing the first quilt research seminar, which launched the American Quilt Study Group (AQSG).  Joyce was a founding member with Sally Garoutte and presented a research paper entitled “Four Twentieth Century Quiltmakers” at the first seminar.

Joyce is devoted to an event she started in 1981, a quilters’ retreat that has come to be known simply and affectionately as Point Bonita.  Beginning in about 1985, Joyce started bringing her research files to provide a research room connected to the event.  Michael James (the Quilters Hall of Fame 1993 honoree) was one of the early artists in residence.  Point Bonita continues under the direction of Joyce Gross until 2001, when Kathlyn Ronsheimer took over.  Thirty years after its inception, Point Bonita’s popularity within the quilt community remains high, as it evidences by its long waiting list.  Every January, a group of quilters and quilt historians immerse themselves in a week long “camp” overlooking beautiful San Francisco Bay.  Prizewinning quilts have developed from this experience, as well as quilting careers, research projects, and lifelong friendships.  A list of the attendees and artist in residence would create an interesting list of who’s who among quiltmakers of the end of the twentieth century and beginning of the twenty-first century.  Point Bonita is a true manifestation of Joyce’s love for sharing her knowledge and her research collection.

Beginning with the first quilt top she purchased-for three dollars at a flea market-Joyce has been a collector of virtually all things related to quilts.  In 1993, she exhibited her collection of quilts and ephemera at the American Museum of Quilts and Textiles in San Jose, California, in the exhibit A Passion to Know: Portrait of a Quilt Scholar, Archivist, Author-Joyce Gross.  In 1997, Joyce and her longtime friend and fellow Quilters Hall of Fame honoree Cuesta Benberry organized an exhibit and seminar, 20th Century Quilts 1900- 1970: Women Make Their Mark, at the Museum of the American Quilter’s Society, Paducah, Kentucky.

Joyce Gross was on the leading edge of the late twentieth century’s quilt revival.  Her pioneering work in primary research, writing, and publishing was recognized in 1996, when she was inducted into the Quilters Hall of Fame.  When introducing Joyce’s keynote speech at the AQSG seminar in 1995, Cuesta Benberry stated, “I have recited some of Joyce’s accomplishments in order to answer one question: How did Joyce Gross come to be termed a legendary quilt figure?  In short, she did it the old-fashioned way.  She earned it.”

The Joyce Gross Quilt History Collection was acquired in spring 2008 by the Center for American History, later renamed the Dolph Briscoe Center for American History, and the Winedale Center for the Quilt (WCQ) at the University of Texas at Austin.  The collection included more than 170 quilts by such noted American quiltmakers as Bertha Stenge, Florence Peto, and Pine Hawkes Eisfeller.  The collection is 150 linear feet of archival material, including extensive files of original and photocopied correspondence from quiltmakers such as Floren Peto, Emma Andres, and Maxine Teele; biographical and subject research files; printed exhibition catalogs, pattern booklets, and exhibition posters; vintage textiles; photographs; and quilt related ephemera.  The acquisition was made possible in part by a generous gift from Karey Bresenhan (the Quilters Hall of Fame 1995 honoree and Nancy O’Bryant Puentes, founders of Quilts, Inc. and producers of the international Quilt market and Festival.  Although it comprises such a large collection of items that it would be difficult for any institution to process completely, it is open for research through inquires and by appointment.

An exhibition from the Joyce Gross collection, The World According to Joyce Gross: Quilts from the Dolph Briscoe Center,

Opened at the San Jose museum of Quilts 7 Textiles in August 2009, and later that fall some of those joined others in an exhibition at the Bob Bullock Museum in Austin Texas.  Nancy Bavor, curatorial intern for the San Jose exhibition, said, “The quilts in this exhibition are tangible evidence of Joyce Gross’s lifelong fascination with quilting.  Joyce’s impact on the quilt world, however, reaches far beyond her extensive quilt collection.  Early on, she realized the importance of preserving not only the quilts themselves, but also the documentation about the women who made them.”

Perhaps the longest and most widespread legacy of Joyce Gross will be the quilt historians, quilt artists, and quilt enthusiasts she brought together over many years at Point Bonita.  Their work and knowledge of quilt history will be passed on to new generations in ways that are unpredictable.

“We hope to encourage as many people as possible to get into the act, because there is so much to do in research and recording….When your story is published, it can be appreciated by and shared by all of us now, and will become part of the quilt story of the future generations.” 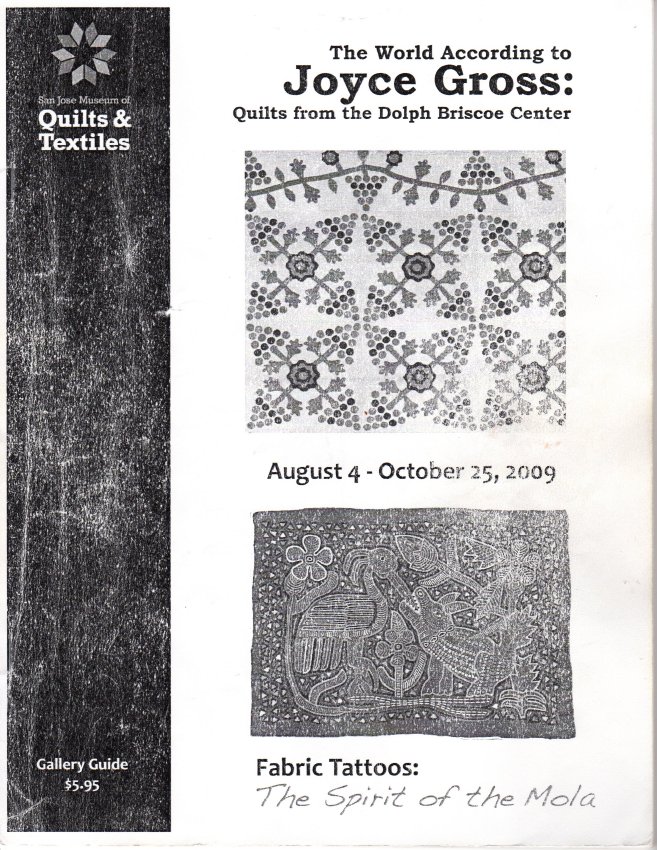 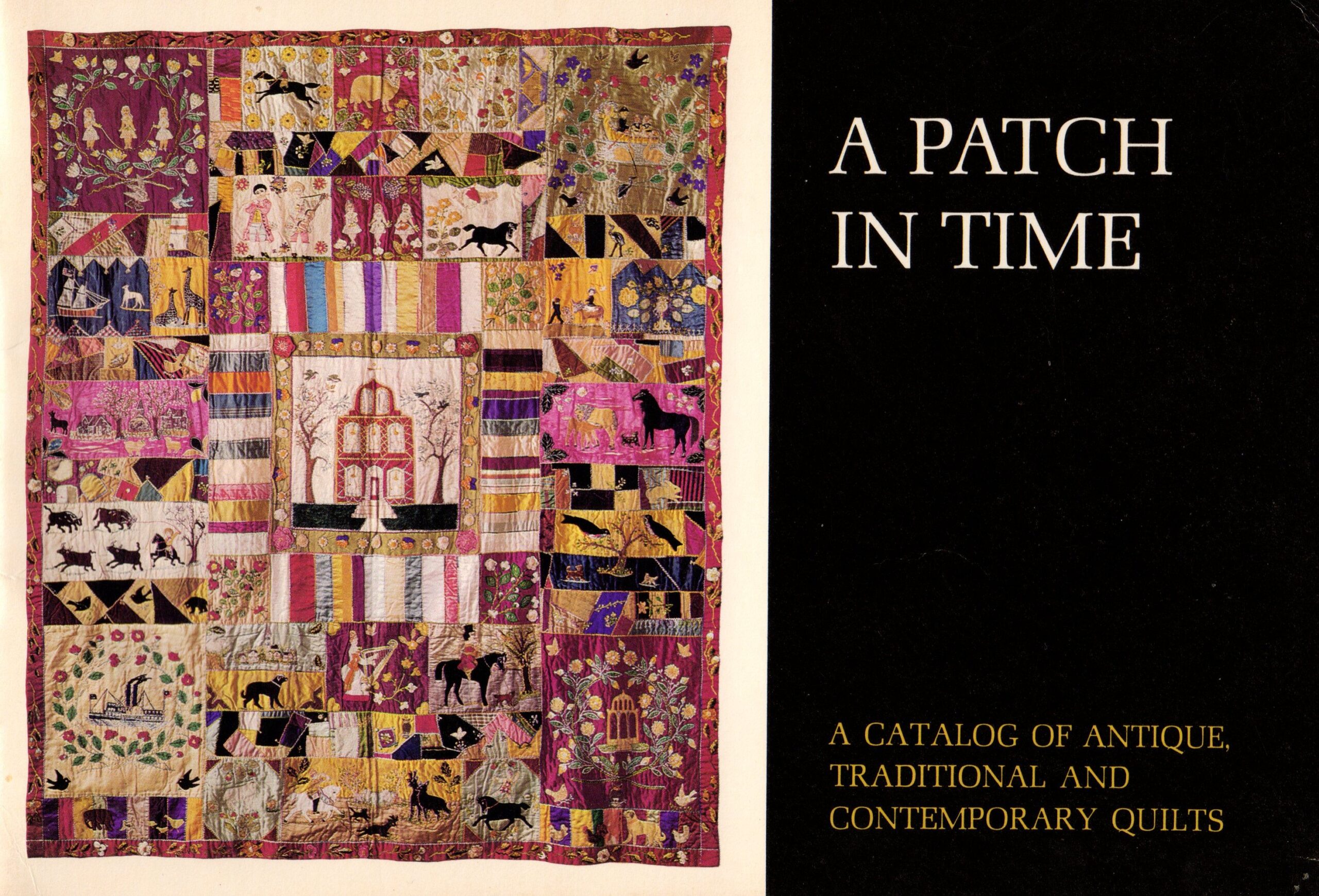 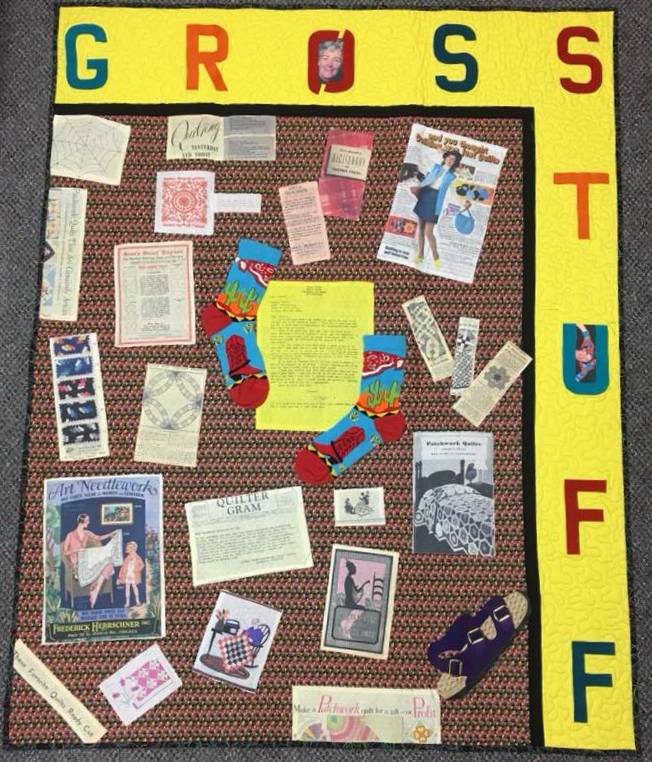 This quilt was designed and made by Xenia Cord (Kokomo, Indiana) and quilted by Ceclia Purciful (Sheridan, Indiana) in honor of Joyce Gross. The reference to “stuff” ties back to discussions that Joyce and Cuesta Benberry had over the years on quilt documentation materials. Cuesta called it “ephemera”; Joyce called it “stuff.” 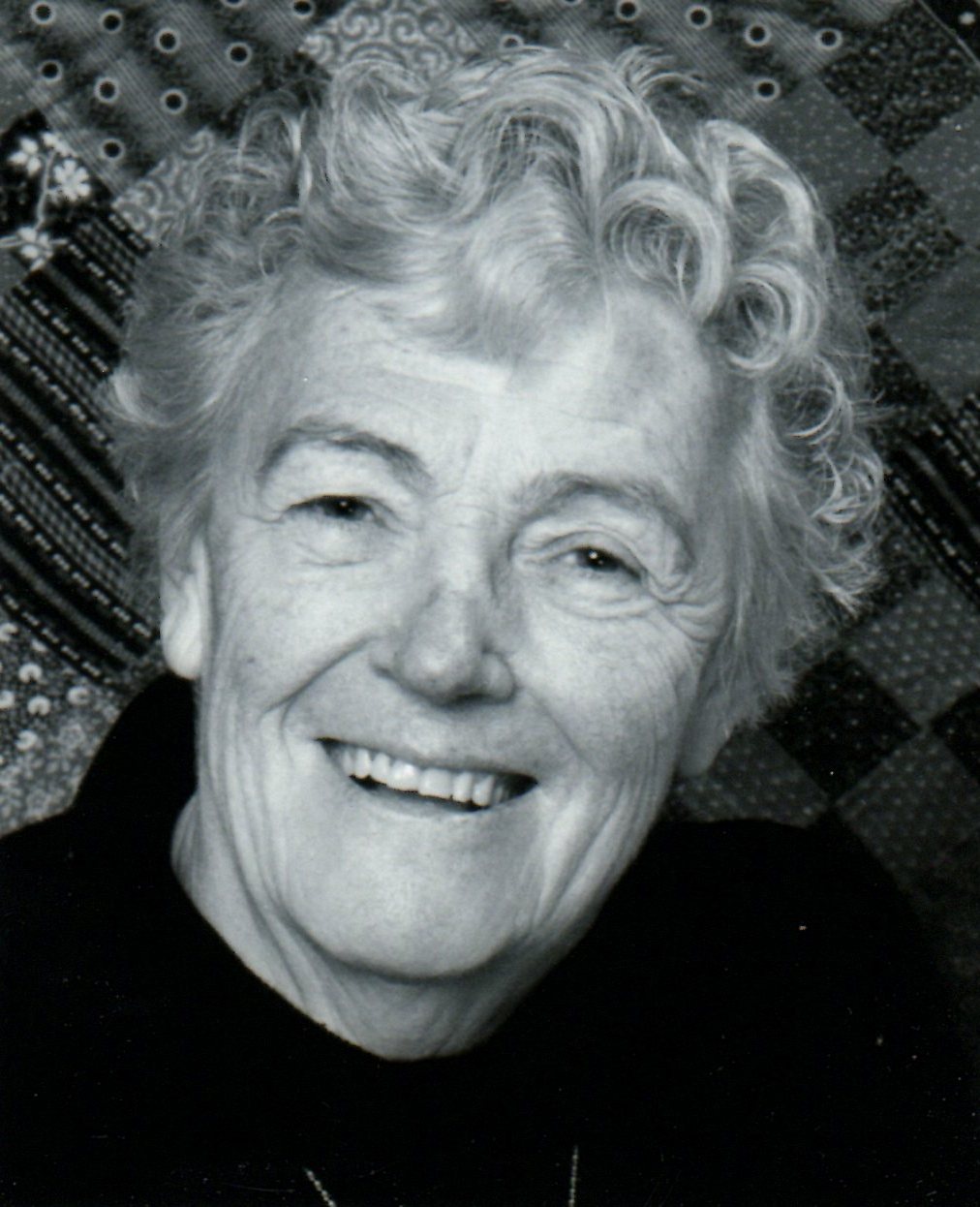 A Patch in Time: A Catalog of Antique, Traditional and Contemporary Quilts.  Exhibit sponsored by the Mill Valley Quilt Authority, 1973.

Quilts of the West. Catalog of the exhibit produced and organized by Joyce Gross, Bank of America World Headquarters, San Francisco, CA. 1976.

Gross, Joyce, and Cuesta Benberry, 20th Century Quilts 1900-1970: Women Make Their Mark.  Catalog for the exhibit at the Museum of the American Quilter’s Society, Paducah, KY  1997.