Throughout her extensive and varied experience in the quilt world, Karoline Patterson Bresenhan has often heard words like no, can't, and impossible, but the determination and a drive inherited from her Texas pioneer ancestors, the founder of Quilts, Inc. and its numerous shows and affiliated organizations has helped to spread the art and craft of quilting across the United States and all over the world.  "I certainly has no grand plan" Bresenhan says today, but I rarely give up on anything I think is a good idea".

Though Karey is descended from a long line of quilters, her initial exposure to quilting did not come until 1963, when she joined her grandmother, mother, aunt, great-aunts, and cousin in a round-the-clock quilting bee to finish her wedding quilt in time for her marriage to Maurice Bresenhan Jr.  This Touching Starts quilt had been pieced by Karey's great-grandmother Karoline when her namesake was born.

"Now learn to take pretty little stitches," her grandmother admonished during this initial quilting foray, "because your'e going to have to wake up every morning of your life and look at them."  It proved to be sound advice that Karey still follows today.

She learned through her quilting how important it is to do a good job in the small steps that lead to life finished projects.

After graduating from Sam Houston State University in 1962, Karey held a series of positions in teaching, editing, and  public relations.  In 1969, she received a master's degree in journalism from the University of Texas, and from 1970 to 1974, she served as vice president of a large public relations firm.  In 2974, she turned her efforts to politics, running as a Democrat for the Texas legislature and funding much of her campaign by selling antiques and quilts to friends' homes.  Although she lost the election she has continued to be involved with civic, political, and health issues, particularly those centered on women.

In 1974, Karey, along with her mother-in-law, Mary Kelly Bresenhan, opened Great Expectations, a retail antique shop in Huston.  She hung family quilts to camouflage the bare areas where they lack enough merchandise to fill the store, but when customers began to inquire more about the quilts than the antiques, Karey realized that a surprisingly large number of people held and interest in quilts, quilting, and quilt history- and she found her niche.

Positive responses from customers led to her first Quilt Fair in 1974-a thank-you to the city of Houston for a great first year in business-an event that attracted thousands of eager aficionados and was the precursor to the famous International Quilt Festivals to come.

in 1976. Karey and her mother, Jewel Patterson, founded the Quilt Guild of Greater Houston.  Karey converted her antique shop into Great Expectations Quilts, which grew into one of the nation's largest quilt stores.  It closed in 2003, following the death of her mother, who had been the senior quilting teacher at the shop for two decades.

The Houston guild decided to sponsor the annual Quilt Fair-with Karey as chairperson-to capitalize on the excitement created by the inaugural event.  When the guild stopped running the fair, Karey stepped in to see the popular show continued.  Today, the International Quilt Festival in Houston is the largest annual show, sale, and quiltmaking academy in the world, attracting more than 50,000 visitors each year.  Some 5,000 quiltmakers participate in the festival 350 classes and lectures, and it has become Houston's largest convention.

In 1979, Karey held the first Quilt Market exclusively for quilt shop owners, to give them direct access to wholesalers of fabrics, books, and quilting supplies from around the country.  In the same year, she formed Quilts, Inc., which is still the parent company for her shows and projects.

Also in 1979, she co-founded the South/Southwest Quilt Association with her mother, her aunt Helen O'Bryant, and her cousin Nancy O'Bryant Puentes.  This group evolved into the International Quilt Association, a nonprofit organization dedicated to advancing quiltmaking throughout the world.

A deep love for her home state of Texas, a desire to celebrate the 150th anniversary of Texas independence, and the opportunity to focus attention on the contributions of female quiltmakers provided the impetus for the first Texas Quilt Search-just the second quilt documentation project in America.  Karey and her cousin Nancy traveled to big cities and tiny towns, documenting Texas's unknown quilt treasures and the stories behind them.  Their efforts, and those of many other volunteers and nonprofit organization, led to an exhibit in the statehouse rotunda and the two volumes of Lone Stars: A Legacy of Texas Quilts, coauthored by Karey and Nancy. An adjunct effort, the Great Texas Quilt Roundup, showcased contemporary Texas quiltmaking.

Soon Karey found herself exploring a new market-Europe.  While writing Hands All Around: Quilts from Many Nations,  she made many contacts in Europe and realized that there was enough interest to support a sister consumer show and trade show.  In 1988, the Patchwork & Quilt Expo and the European Quilt Market were first help in Salzburg, Austria.  The expo regularly attracted nearly 20,000 visitors from more than thirty counties and was held in Holland, France, Austria, Denmark, Germany and Spain.  The final Quilt Expo was held in France in 2006.

Karey's next challenge was an issue very close to her heart and to the hearts of quilters around the nation.  When the Smithsonian Institution licensed some of its rarest quilts for reproduction overseas, many american quilters felt betrayed, believing that this showed a lack of understanding of the iconic status of these quilts.  Karey was also convinced that the practice would harm the economic status of the U.S. quilting industry, and indeed, sales of American made quilts dropped precipitously. Karey initiated a nationwide petition drive that collected 25,000 signatures.  Karey and others took the battle to Congress, presenting the petitions and testifying before a U.S. House of Representatives Appropriations Subcommittee.  The Smithsonian ultimately decided not to renew the licensing agreement that allowed copies of the quilts to be made in China.

This experience prompted Karey Brensenhan, Nancy O'Bryant Puentes, Eunice Ray, and Shelly Zegart to found a nonprofit organization, the Alliance of American Quilts, to preserve and make accessible information about American quilt history.  Their projects include the Center for the Quilt Online, Boxes Under the Bed (to promote the preservation of quilt documentation), Quilters S.O.S. (Save Our Stories, a project to collect oral histories of quilters), Quilt Treasures, and the International Quilt Index.  "The alliance is an umbrella organization under which all elements of the quilt world can unite to achieve these goals." Karey says.

As a quilt historian who specializes in the dating of fabrics, Karey has a deep appreciation for antique quilts.  One of her proudest accomplishments was the creation of remarkable exhibit at the Houston Quilt Festival; America's 100 Best Quilts of the 20th Century.  The exhibit succeeded in bringing to Houston seventy-five of these incredible quilts, which had been selected by representative of five major quilt organizations.

After the tragic events of September 11, 2001, Karey curated another exhibit, America: From the Heart. "We had no idea how many quilts would be sent in," she says. "And oh, how many splendid quilts they made- so many beautiful, heartfelt quilts that served not only to help the quilt artists deal with their own sorrow and anger over what had happened, but also helped viewers come to grips with the horror and yet realize that despite everything, our nation would go on."

A silent auction raised more than $25000 for Families of Freedom Scholarship Fund, for the education of family members of the terrorists' victims.  And from the exhibit came a book, American: From the Heart, which Karey edited, with all of the profits earmarked for the same fund.  Karey Bresenhan's collection of quilts, which began with pieces inherited from both sides of her family, now number more than 250 quilts, in her personal collection and in the corporate collection of Quilts, Inc.  She has one important criterion for adding a work to her collection: "I collect a quilt only if it speaks to my heart," she explains.  "It can be a wonderful, valuable quilt... but if I don't love it, then none of that matters."  She has recently collected more contemporary art quilts because she believes it's essential to support quilt artists working today.

In 2003, Karey created a second International Quilt Festival-a spring show in Chicago, Illinois (since moved to Cincinnati, Ohio), which has enjoyed tremendous success.  She then started a summer edition in Long Beach, California, in 2006.  With Nancy O'Bryant, she coauthored a book about the festival and its quilts, Celebrate Great Quilts! published in 2004 to mark the thirtieth anniversary of the show.  Other books that she either wrote or edited include I Remember Mama, Creative Quilting:  The Journal Quilt Project, and 500 Art Quilts.

Also during this period, Karey opened the Great Expectations Creativity Center in La Grange Texas.  Featuring a fully functional classroom, studio and dormitory, the center regularly offers seminars and workshops from many top instructors from all over the world, as well as hosting an artist in residence program. Quilting groups have also used the facility to hold retreats, and Quilts, Inc. conducts business meeting in the scenic surroundings as well.

The year 2011 will see the publication of the third volume in the Lone Stars series, Lone Stars III: Texas Quilts Today (1986-2011), written with Nancy O'Bryant.  It will also see the opening of the Texas Quilt Museum in La Grange, Texas.  The museum a lifelong ambition of Karey's will feature both permanent and rotating exhibits of quilts, with an emphasis on quiltmakers and artist from the Lone Star State.  Both projects will also celebrate the 175th anniversary of Texas independence. Finally, Karey is spearheading the Texas Barn Quilt Trail program, with the goal of having a large "quilt block" on display in every county in the state.

Many honors have come her way.  In 1995, she was inducted into the Quilters Hall of Fame.  She has received the Distinguished Alumni Award of Sam Houston State University and also was the first recipient of Bernina's annual Quilt Leadership Award.  Innovative businesswoman, quilt historian, and industry advocate.  Karey Bresenhan had been on the the prime catalysts for the growth of quilting in America for nearly forty years-and she's not finished yet!

"Today, quilts old and new - the products of an artistic tradition and heritage - continue to touch American lives, regardless of economic or ethnic differences.  In this century, it can truly be said that quilts have become America's collective memory bank" 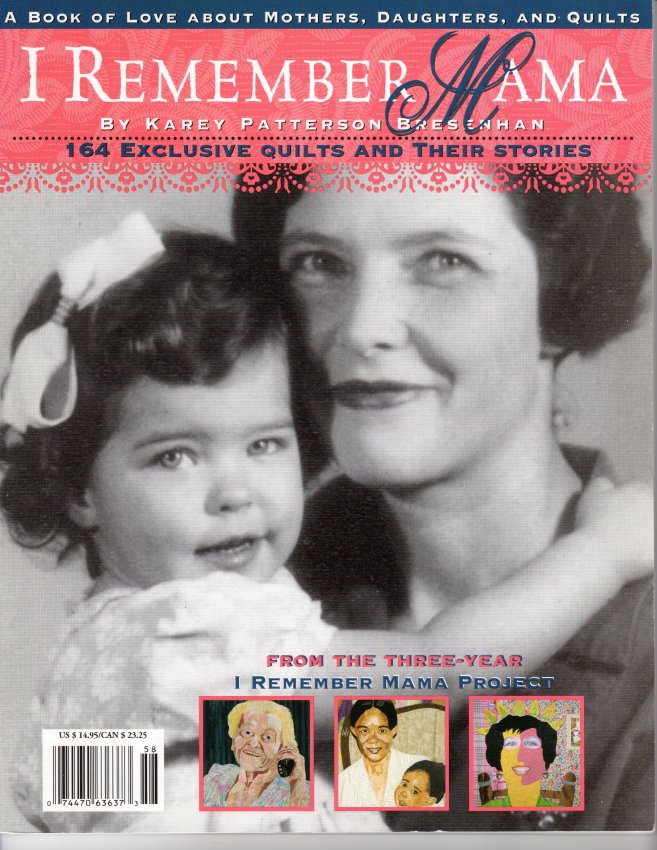 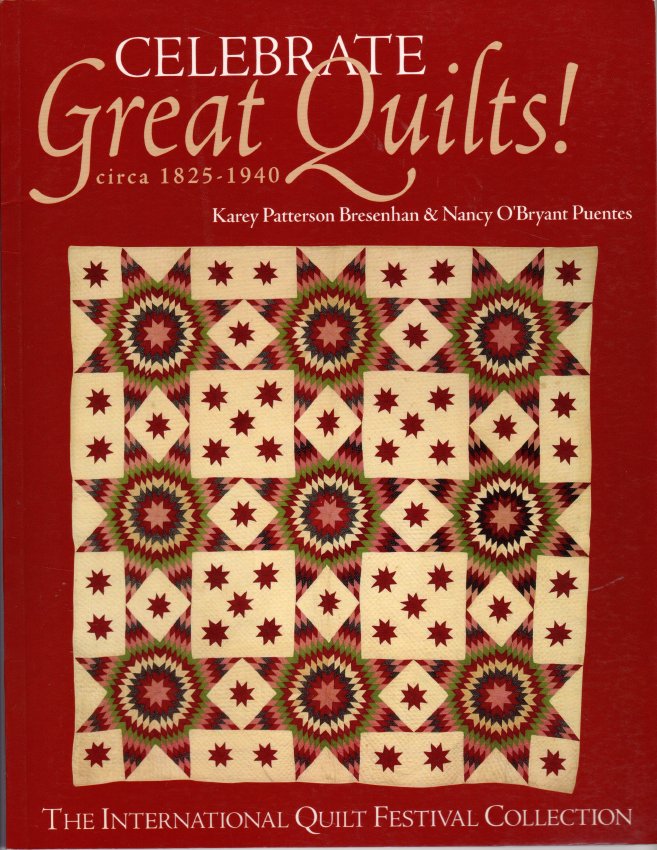 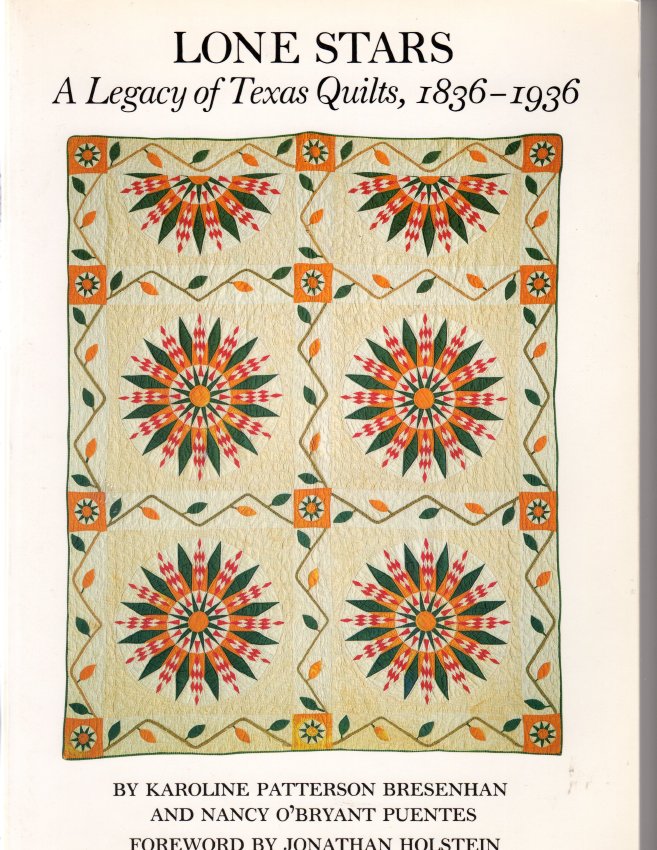 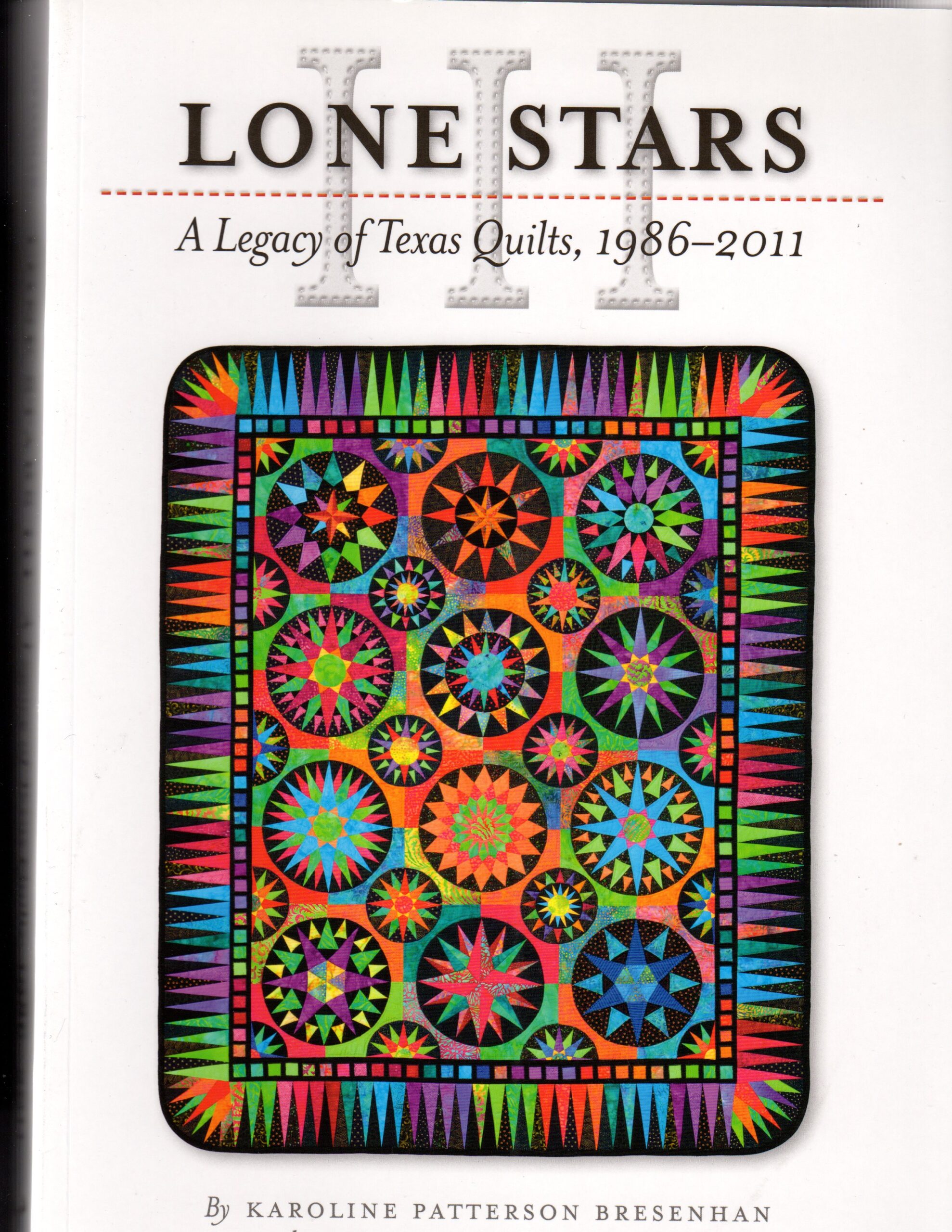 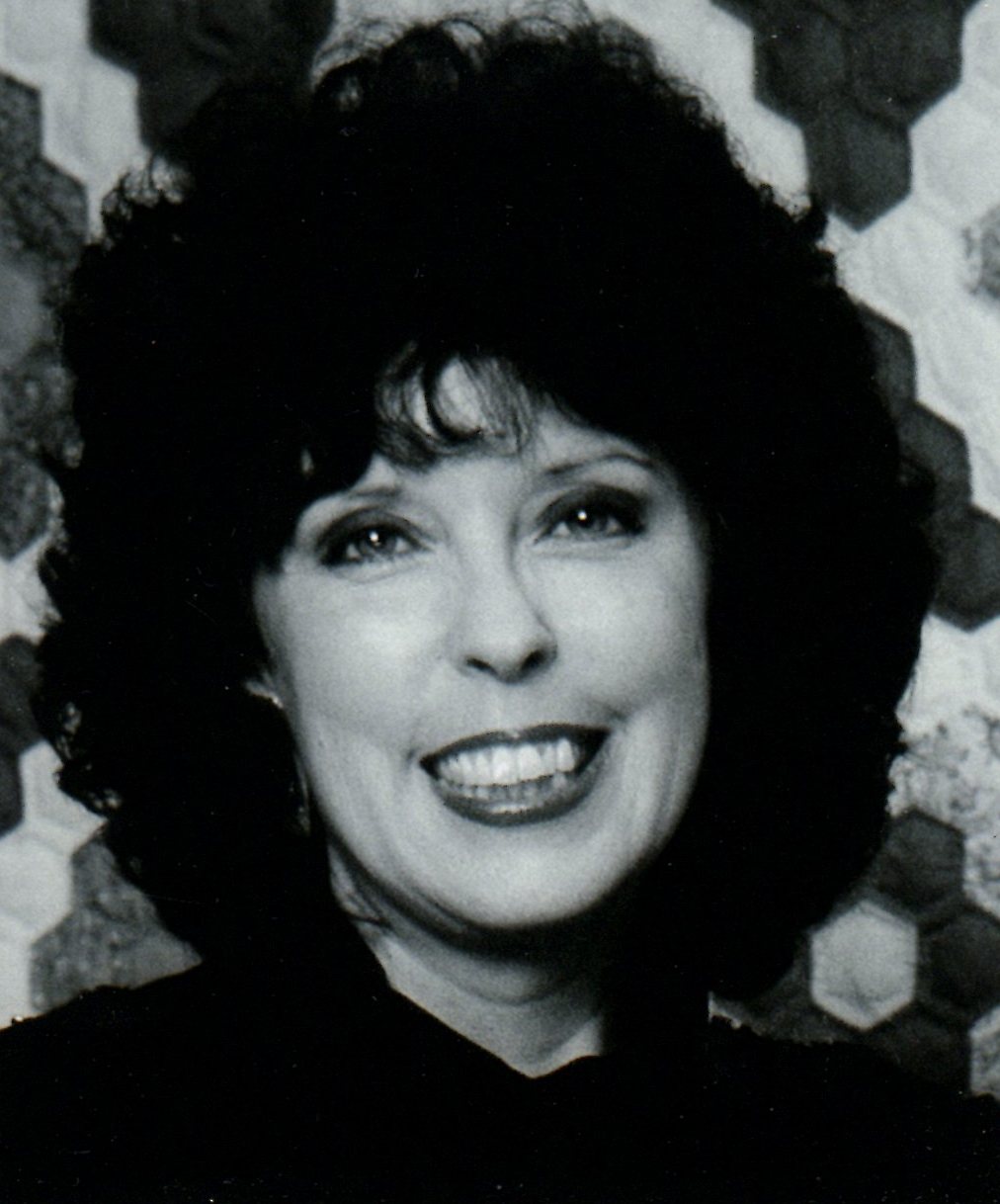