In 1899, the family moved to Independence, Missouri. Although Morris died two years later, Viola decided to stay in Independence, and Ruby graduated from Independence High School in 1910. While at school, Ruby won the coveted Art Award in her senior year. She served as art editor for the high school yearbook, which featured her whimsical pen-and-ink drawings- her first works to appear in print.

In an era when young girls were usually sheltered at home until marriage, in 1910, at the age of nineteen, Ruby set off for New York City to study design with Frank Alvah Parsons at the New York School of Fine and Applied Arts (today known as Parsons The New School for Design). Excited by everything in the big city, her letters home were filled with drawings of whatever she was creating: ceramics, jewelry, or portraits of studio models. This style of correspondence continued throughout her life.

Returning home a year later, Ruby began teaching in the fall of 1911 for the Independence public schools and by 1912 was supervisor for drawing, a position that covered grades one through twelve. In 1916, she began teaching at Kansas City Manual Training High School and sponsored a club for students interested in the fine arts. This was also the year her needlework designs were first published in the Kansas City Star. Her Bedtime Quilt was made up of twenty "Quaddie Quilties," embroidered squares illustrating Thornton Burgess's popular stories of woodland creatures.

Ruby married a former high school classmate, Arthur McKim, on July 16, 1917. As soon as their baby, Betty, born October 31, 1918, could be left with the grandparents, Ruby and Arthur took to the road to sell Ruby's patterns and design ideas to publication syndicates across the country. As Betty grew, the letters from Mama contained drawings of whatever she and Arthur saw that day: children playing in the ocean, Daddy resting in a big chair after a hard day. Ruby's spelling was sometimes questionable, but her drawings made the letters like small storybooks to little Betty, waiting at home. When their second child, Marilyn, was born five years later, the grandmothers informed them that Ruby's traveling days were over.

After a short stint in St. Louis, the family returned to Independence and converted the first floor of Viola Short's home into offices and made the second floor into apartments for the two grandmothers. By 1925, McKim Studios had become a home-based mail-order business that oversaw the publication of Ruby Short McKim's designs in newspapers and magazines throughout the United States. The McKims also published catalogs of patterns and kits, under titles like Patchwork Patterns and Designs Worth Doing.

In January 1922, Ruby began a sixteen-year career with Child Life magazine with her Alice in Wonderland series. She was soon supplying designs to other magazines and syndicated features. The Kansas City Star, the Omaha World-Herald, the Nebraska Farmer, Woman's World, Successful Farming, and the Indianapolis Star were among the publications that featured McKim designs. Ruby also became the artcraft editor at Better Homes and Gardens, designing kits and patterns for quilts and other home decorating projects.

Many of Ruby's quilts reflected her interest in children and education. The Jolly Circus, Nursery Rhymes, Colonial History, Bible History, and Bird Life quilts were just a few of her series that appeared in the 1920s. Farm Life, State Flowers, Flower Garden and Patchwork Parade of States were among her popular series in the 1930s. Each new pattern was eagerly awaited, clipped out, and saved by women who were determined to collect the entire series. The newspapers running her patterns often sponsored contests for the quilts made from these patterns, which attracted hundreds of entrants and thousands of enthusiastic viewers. Many of these collections have survived, have been reprinted, and are even offered on the Internet, proving that the popularity of the McKim designs persists to this day.

Ruby inspired others to think and act creatively. She found joy in teaching others to apply the principles of balance and proportion in art that would grace the home in an attactive but still useful manner. Ruby's creativity flowed into every aspect of her life, and she was fortunate to have a husband who recognized her talent and the need to express it. They thought of themselves as the "Two Ones" - each totally independent in what they did but totally dependent on the other for support and inspiration.

In 1931, Arthur oversaw the publication of Ruby's book, One Hundred and one Patchwork Patterns. The book served as a comprehensive pattern encyclopedia and how-to book for avid quiltmakers at a time when obtaining this information was a daunting task.

Shortly after the book was published, the family went to Europe to explore other publishing markets. They came home with a contract for a paper in Australia and a new idea for another business- imported, domestic, and antique dolls by mail order. During the mid-1930s, McKim Studios gradually evolved into Kimport Dolls, a business that continued for the rest of their lives and was later carried on by their son, Kim, who was born in 1933.

Throughout Ruby's life, art was her passion. She sketched with watercolors on vacations and family outings. She created homemade tags for presents that had limericks to match the small pictures she drew as clues as to what was inside. Even snack time with the family involved artistically cut little sandwiches (with very strange fillings made from leftovers) arranged with flair upon platters. But best of all, to me and to her other grandchildren, she would make each of us a sock doll with colored-pencil-drawn faces whenever we stayed overnight. (Being a very thrifty person, she would recycle the dolls back into socks the following morning.) The dolls were accompanied by a magical story with whatever three characters we requested, skillfully interwoven. Bedtime finished with her singing the old spiritual "Swing Low, Sweet Chariot" as a lullaby.

It was only at her funeral, when I heard the words to the spiritual being sung, that I realized the full impact she had on the members of my family. I knew why I had to write or draw whenever happy or sad. Creativity must be cultivated... and she was the gardener of our lives. She passed these lessons on to us and also to the thousands of women who used her designs to decorate their homes for their families.

Ruby was a wife and mother, an artist and businesswoman, and a charming person to know. She had two personal mottoes that I will always remember: "If you don't feel good, put on your company face and keep going," and "You only fail when you don't try." She always smiled and she never failed. Ruby's husband, Arthur, passed away in 1967. At his death, she penned a poem as a tribute to the part he played in her life, and it was sent to all their mail-order friends as a final memorial to their life together. Ruby died nine years later, on June 28, 1976.

Ruby Short McKim's induction into The Quilters Hall of Fame in 2002 recognized her important contributions to the quilt revival of the early twentieth century, through her widely distributed designs, her book, and her business.

"Quilts- We never have too many...

Something useful, something beautiful

or fittingly clever when finished

should of course be the aim of every woman 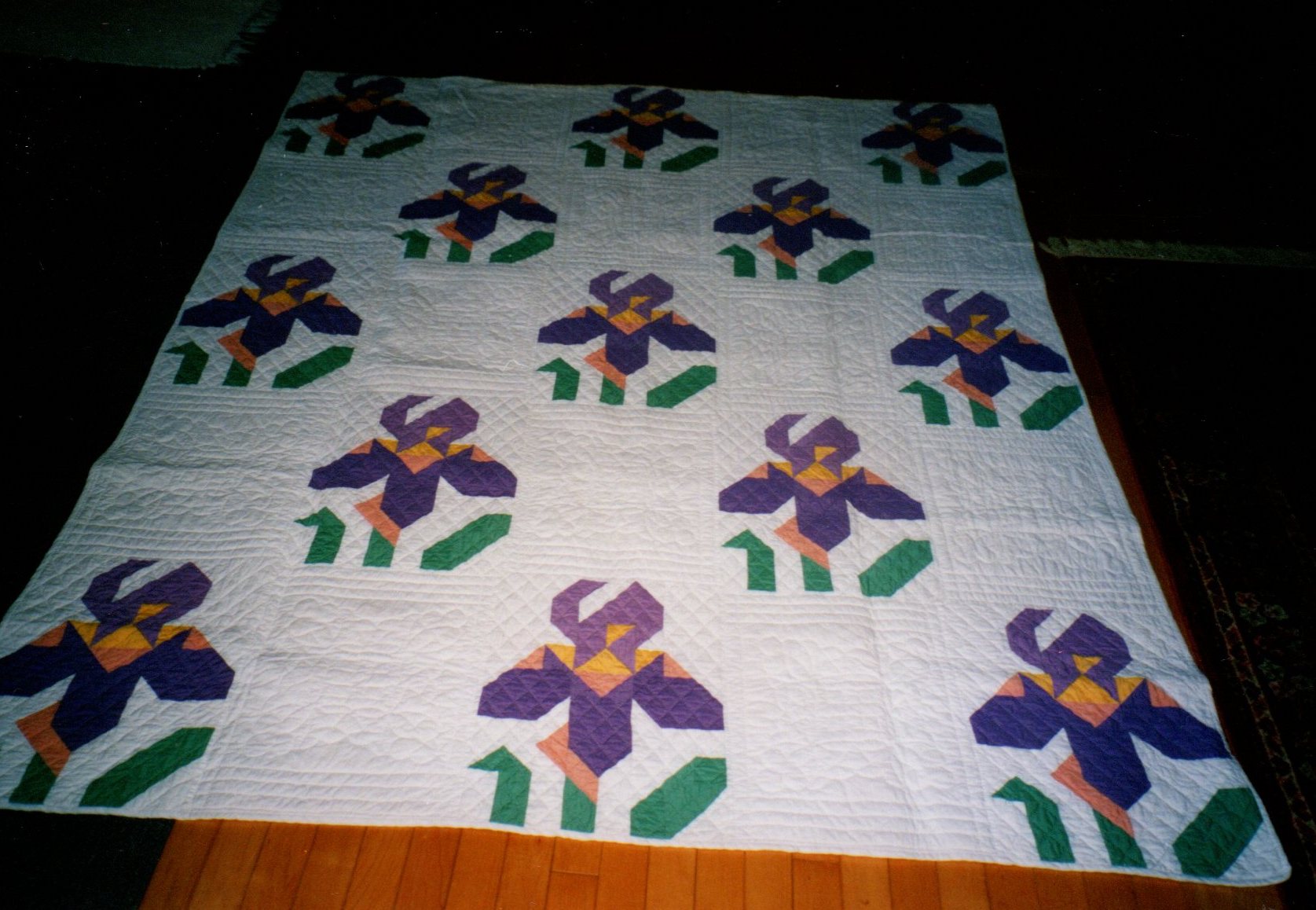 Pieced Iris from a Ruby Short McKim pattern. Maker and date unknown. Hand quilted. From the collection of The Quilters Hall of Fame. 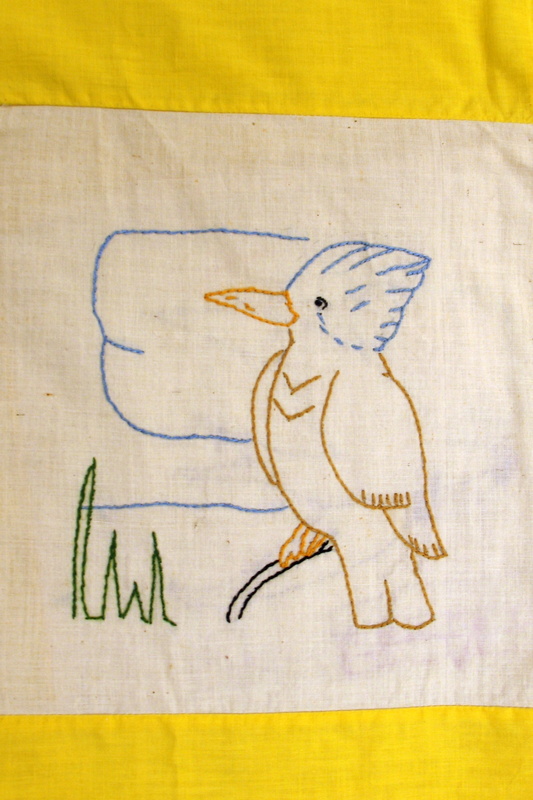 Embroidered Kingfisher design from Ruby's Birdlife series. Maker and date unknown. From the collection of The Quilters Hall of Fame. 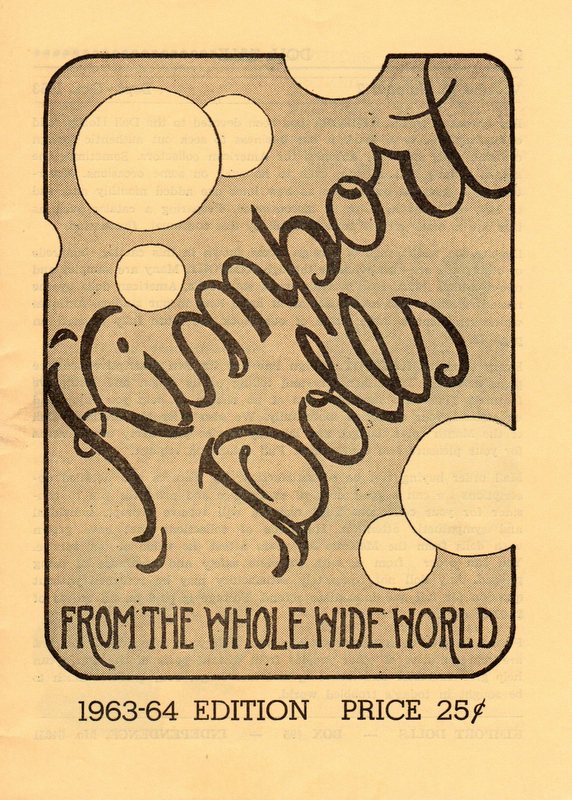 Kimport Dolls Catalog 1963 - 64 Edition. From the collection of The Quilters Hall of Fame.