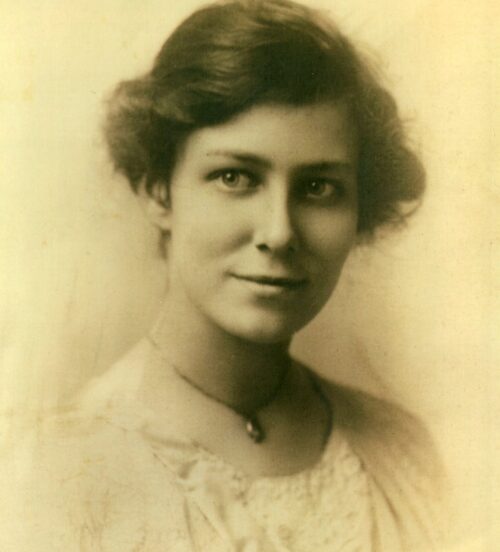 Ruby Short McKim developed her views of art at the New York School of Fine and Applied Arts. The driving principle was that art is for the average person and art should fill the homes of all. Ruby’s training in the arts opened the doors for her to flood the US and other countries with her own art in the form of quilts, embroideries, and dolls.

Ruby received her diploma from the school in 1912. In 1916, the Kansas City Star held a quilt design contest as a promotion to sell the new book of Bedtime Stories by Thornton Burgess. The stories were about his woodland animals who lived in Green Meadows. Ruby submitted her “Quaddy Quiltie Bedtime Quilt.” Ruby’s quilt was made up of twenty embroidered squares. Her needlework designs were published in the Kansas City Star. The stylized drawings of small animals were angular “so as to not scare the small child who would wake up to see a wild animal sitting on his bed.” The angular characters drawn on a grid became a signature trademark for her early work.

In 1928 Ruby published a series called “Story Book People in Paint.” With this project a child would trace the picture onto a piece of cloth and then color it with crayon, which was then set with a warm iron to create a painted effect.

Ruby was soon offering designs for adults too. Bird Life Quilt (1928), Flower Garden Quilt (1929) and Farm Life Quilt (1930) were published in newspapers, usually one block per week. Many times the newspaper held a contest to choose the best completed quilt after the series was finished.

McKim Studios offered their quilt designs as a pattern, the pattern plus the material, or the pattern with pre-cut material. Also, a finished top could be sent to the Studio to be quilted. If one wanted to buy a finished quilt, that could be arranged too.

The State Flower quilt was published in 1931. There were 48 blocks each with a state’s flower and the state stitched in the corner. By this time, Ruby’s work was internationally syndicated beyond the United States in both Canada and Australia.

To learn more about Ruby Short McKim, see her biography on The Quilters Hall of Fame website, https://quiltershalloffame.net/ruby-short-mckim/.