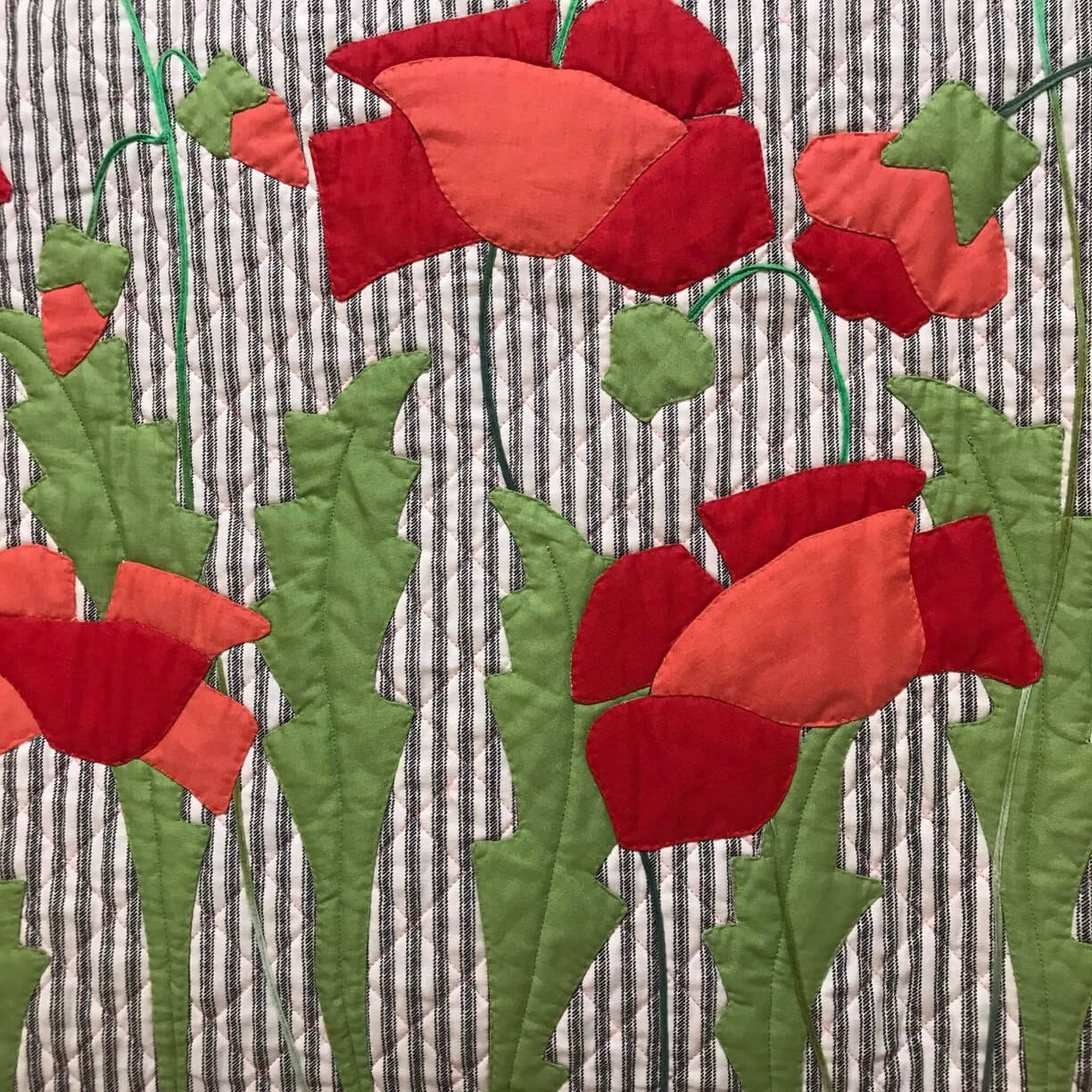 We’ve recently honored our veterans, and there were lots of poppy memes and photos going around the internet.  Deb Geyer shared these from The Embroiderers’ Guild of Victoria:

And I found this beaded example by Crystal Behn, A Dine and Carrier artist:

The first Embroiderers’ Guild shot looks like a quilt, so I’m somewhat on topic, but since this is the Hall of Fame blog, I’d be remiss if I didn’t show Marie Webster’s Poppy quilt (The above version was made using Quiltsmart printed interfacing). You’ve all seen it in red, and maybe pink; this is a rather rare colorway from the collection of Suzanne Hardebeck:

Marie’s design has inspired many interpretations.  Here are two that have been exhibited at the Quilters’ Hall of Fame. The one on the left is “Love Returns” by Susie Goodman, and the one on the right is from Bonnie Browning’s lecture at Celebration 2013.

I could tell you that the takeaway here is “Poppies are popular”, but my real intention was to provide a segue to an idea that struck me when I was at the Milwaukee Museum of Art a little while ago: twinning art and quilts. I thought it would be fun to see how many paintings would put me in mind of a TQHF Honoree.

You may be familiar with the story of how TQHF Honoree Jonathan Holstein noted the connection between the work of artists like Josef Albers and Amish quilts, and went on to mount the seminal exhibit of quilts as art at the Whitney Museum fifty years ago. Here are two Albers compositions from Milwaukee, and you can readily see the similarity between them and a log cabin quilt.

The paintings also made me think of the progressive color bands in the American Tapestry (Trip Around the World) kits sold by Heritage Honoree, Mary McElwain.

These were just the first connections I made.  When I turned the corner, I came across another potential pairing, Georgia O’Keefe and Ruby McKim. What different interpretations!  Where O’Keefe is organic in form, piecers have to be more angular. I personally find the painting to be almost sensual, but I also love the orderly arrangement of the quilt.

Next up was a fun artist who was totally unfamiliar to me: Cleveland Brown. I thought at the time that he and Honoree Yvonne Porcella would probably be kindred spirits.  Their work shows a real sense of whimsy and action. Contrast these two treatments with Ruby McKim’s “take” on a circus. (I’ve put them one after another because I couldn’t figure out how to create a three-ring circus and still show detail.)

And finally, another Porcella/ painter visual connection can be made with Yvonne’s first quilt, “Takoage”, and an intriguing 3-dimensional piece by Israeli artist Yaakov Agam, “Union II”.   The painting is done in such a way that it changes colorway as you move in front of it. First the quilt, and then a left-center-right view of the painting.

The painting also makes me think of Honoree Michael James’ early work.  Here’s one of his quilts in the same colorway as the right view of Agam’s work.

If I count an O’Keefe/ Webster poppy match, I’ve linked six Honorees with paintings (some with multiple connections): Marie Webster, Jonathan Holstein, Mary McElwain, Ruby McKim, Yvonne Porcella and Michael James.  I’ll bet you can think of more.  I invite you to try to try this fun exercise the next time you visit an art gallery or museum, and let me know what you find.