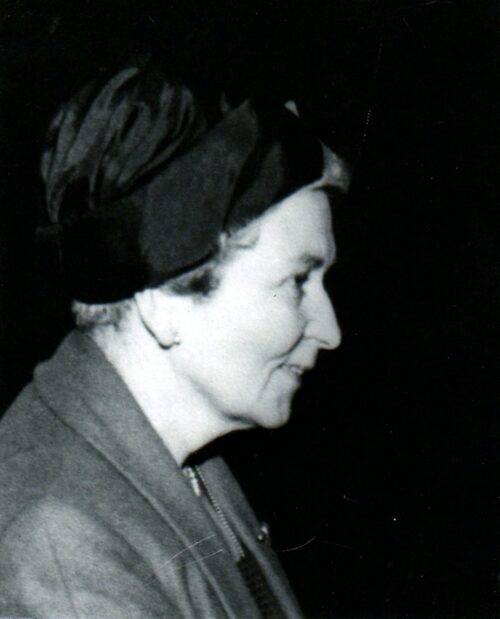 This week’s Honoree, Averil Colby, would fit right in with the contemporary taste for English Paper Piecing. Yes, she herself was English, and little hexagons were her preferred method of creating, as we’ll see in a moment. But first, a short introduction; for a fuller bio, see the link below.

Colby was Chairman of the Handicraft Committee of the National Federation of Women’s Institutes and was instrumental in organizing courses, classes, and exhibitions to promote and preserve the quilting crafts. Her first book came out in the late 1950s when quilting in Britain was as dormant as it was in the States. According to the Hall of Fame record, “Batsford, a London publishing firm, asked her to write a book on patchwork, as up to then nothing had been published in such depth on the subject in England.” As an aside, this statement makes me wonder how the connections came about, but that’s a research project for someone else.  At any rate, Colby produced four quilt-related books and one book on pincushions, all of which are still available.

The quilt books earned Colby a reputation as a quilt historian, and she is still cited today as an authority on Welsh and North Country quilts.  Her documentation of British quilts is well-respected and is a source of patterning for quilters looking for a reproduction project.  Here’s one of the quilts she found, a 1790 “Marriage Coverlet” along with a modern version called “Love Entwined” (A pattern for the full quilt or a simplified –they say;  it would still be too much for me—instructions for the center only are available at the link below):

Of course, when dealing with quilt history, there are many blanks to fill in.  Colby, like her US counterparts, often speculated, and (not to detract from her reputation but to put her in a mortal/human light) there is a noted instance when her imagination took a wrong turn.  Here’s the quilt in question and a detail of the section that caused Colby to go astray:

Colby looked at this quilt and imagined it had been made by a farmer’s wife because of the presence of so many domesticated animals. She also noted the picket fence enclosure. This theory didn’t explain the anchors or the exotic animals, and completely left the two largest figures on the quilt unaccounted for, but her view was accepted until recently. That’s when a researcher at the Victoria and Albert made the connection to a statue which was well-known around the time the quilt had been made. (There’s some good non-quilt background information about the statue, so I’ve included two interesting links below.)

The original statue was displayed at the Great Exhibition of 1851 and it became popular in ballads, satires, journalism, prints and engravings. Miniature copies were also popular for the rest of the century, and Powers applied for a patent to prevent wholesale copying and profiteering. But his statue is probably the true inspiration for the main figures on the coverlet, despite Colby’s focus on the agricultural connections. Maybe I shouldn’t have said she was wrong;  a farmer’s wife (or the wife of a local landed squire) could have made the quilt, but Colby sure missed the big point.

Well, now let’s talk about Colby’s own needlework. Take a look at these sweet examples from the Collection of the Guild Museum of the Quilters’ Guild of the British Isles. (All of the descriptive text below the photos is from the Guild Museum.)

And here’s another shot from the Quilters’ Guild Museum to give you some sense of scale. If that purple pincushion has such small sides—I presume the gauge is metric, but even in inches the measure is impressive– imagine how tiny the little red pieces are! (Right foreground of the above photo)

Colby was a prodigious maker of pincushions.  It’s reported that she worked while she had callers and often sent a completed pincushion home with them when the visit was over. Not all of Colby’s work was Lilliputian.  Here are two more items from the Quilters’ Guild Museum that are larger than the little pincushions.

Colby amassed a collection of fabrics spanning the late 1700s to the middle of the 20th century. And she used what she collected.

Although she obviously could handle a needle and thread, Colby didn’t do much actual quilt-making; she didn’t think she was “good enough.”  But she pieced what the Brits call mosaics. This last piece brings us to the modern connection: hexies.

Hexies took off in the mid-to-late 2000s, and I made a quilt using the EPP (English Paper Piecing) method. It was easy, accurate and relaxing to do in front of the wood fire one winter, so I understand the attraction for Colby. For me, it was a “one and done”, and I wondered if the trend is still alive.

Answer: Oh YES! Hexagons of all sizes (the larger they are, the more modern the quilt, but many updated Grandmother’s Flower Gardens can also be seen on Pinterest). And the technique is now applied to shapes beyond the hexagon, so there are Caesar’s Crowns and Castle Wall quilts too. Tula Pink has this fun pillow which is so different from Colby’s.

I’ve included some links below if you are interested in a tutorial on EPP.

That covers the modern, but you may remember my initial reference to old-fashioned manners. I always feel fortunate when my reading about an Honoree turns up something that shows a human-interest side of her or him. The quilt-related facts show the public persona, but sometimes I find something a little more private (well, not exactly private because it’s on the internet; maybe lesser-known or tangential is a better description). And that’s when I know I would have liked to be friends with the person I’m writing about. Here’s what I found about Averil Colby.

This is a sample of her editing of the galleys for her first book.  How many authors would use the phrase “be kind enough to…”? She could have used a simple proofreader’s mark (a squashed-down “C” super-imposed on a double slash).  Or she could have just written a directive.  But instead she asked, as if the printer would be doing her a favor. She elevated and equalized the transaction.  That’s old-fashioned manners, and I very much would have enjoyed knowing a person who could bring such grace to a business transaction.

Love Entwined. https://www.estheraliu.com/love-entwined-pattern-shop You might also be interested in the designer’s comments on her making of the pattern.