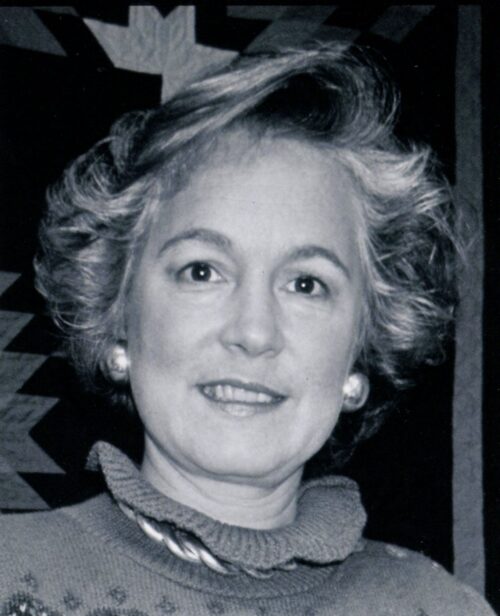 I told you last week that we received a quilt donation from Honoree Donna Wilder, but maybe you don’t know who she is.  Well, if you know Kaffe Fassett, Tula Pink, Kathy Doughty, and Jane Sassaman, or if you drooled over last Fall’s collection from the original (William) Morris Company, you should know Donna.  She was the founder of Free Spirit Fabrics, the manufacturer for these designers. Here’s a photo for  everyone (myself included) who hasn’t been able to get into a quilt store lately.  Thank goodness for online shopping.  But I digress.

Bringing together so many talented people to produce the wonderful styles we see at our local quilt shops would, in itself, be a point towards recognition by The Quilters Hall of Fame, but Donna Wilder had many more points in her favor. Donna has quite a few books to her credit, and most of them were written to introduce people to quilting.  Take a look, and you’ll see the theme.

That’s right, samplers! One of my first quilts was a sampler made from monthly blocks sold by JoAnn Fabrics; I didn’t purchase until they were on sale, and was only able to get four kits, so it’s just a table topper. But what a great way to get started. Donna didn’t do only sampler books.  Here’s her book of florals, and you can see that she included an unusual mix of antique and contemporary projects.

Starting with a B.S. in Home Economics, Clothing and Textiles from Pennsylvania State University in 1964, Donna Wilder held several positions in the textile industry. She began as Assistant Buyer for Abraham & Strauss in Brooklyn, NY, and then moved on to Simplicity Pattern Company. She also worked for Fabricland, Riegel Textile Company and Springs Industries. Her final position, for which she is best known, was V.P. Marketing of Fairfield Processing Corporation.

While she was with Fairfield, Wilder promoted their annual fashion show, providing opportunities for designers of wearable art to strut their stuff.  I wouldn’t have anywhere to wear some of these beauties, especially now when I’m staying home in my comfy clothes, but I can still admire the creativity and craftsmanship involved.

Most of you know that Free Spirit closed last year, (there’s a link below to an interesting article on the economics involved), but let’s take a look back to 2000 and see what Donna did then. “I was asked to come up with a whole new fabric line… and I knew we couldn’t come in looking like Moda, RJR or Hoffman” she said in an interview for The Quilter’s Catalog: A Comprehensive Resource Guide by Meg Cox.  To attract younger quilters and spark creativity, she focused on fabric designs that would lend themselves to a quick and easy, while still gorgeous and impressive, quilt. She called them “large format” quilts. Here are some of Donna’s own designs in that style.

Over the course of six years, from 2000-2006, with a team of just four employees, Wilder grew Free Spirit into a profitable company that she says was grossing five million dollars when Fabric Traditions sold it to Coats & Clark in January of 2007.  And we still love many of her chosen designers today, even though they’ve moved to other manufacturers.

Donna was also a media star.  She hosted Sew Creative with Donna Wilder which had a long run on PBS stations and produced several “how to” books that are still available on Amazon, Etsy, abebooks, and eBay. She also co-hosted episodes of Quilt Central, and you can see some of them on YouTube; there’s a link below to the show on wearable art. And here’s Donna “on the job”.

If you want to read a more detailed biography of Donna Wilder, check the link below to The Quilters Hall of Fame website. But I don’t think a short bio really gives insight to someone’s personality. I don’t know Donna (yet) but I feel I know something about her based on her “quilt criteria”.  Donna has been a judge in many venues, and what she looks for in a winner says a lot about her.  Here are two quilts from her judging along with her comments:

Yes, I think that sums up Donna Wilder: exuberant, respectful of tradition, excited about modern style, aware of composition.  And above all, colorful!

But I’m not ready to sum up yet.  There’s one more thing you will want to know about Donna Wilder.  She wrote a chapter for America’s Glorious Quilts titled “Quilts at an Exhibition” in which she reviewed the history of quilt shows and contests.  One of the things she mentioned was sampler block contests in which participants submitted a block based on the contest theme, and the winners were made into a quilt which was either raffled or displayed by the contest sponsor.  She herself spearheaded several such contests when she was with Fairfield.

This would be a great idea for a guild to do as a pandemic project.  With so many events having been cancelled, we are all looking for ways to keep our hand in the quilting community. My guild is having virtual show and tell along with monthly Zoom meetings, but that can’t replace the feeling we get from doing something together. So why not try a Donna Wilder-style contest?  Your theme could be virus-related, or (if you want to take you mind off all it entails for a while) garden, floral, Roaring 20s, patriotic or something with local relevance.  You decide how to select the winners, how to finish the quilt and whether to raffle or donate it.  Just have fun, remember you’re following a great tradition of quilt contests, and give a nod to Donna Wilder.