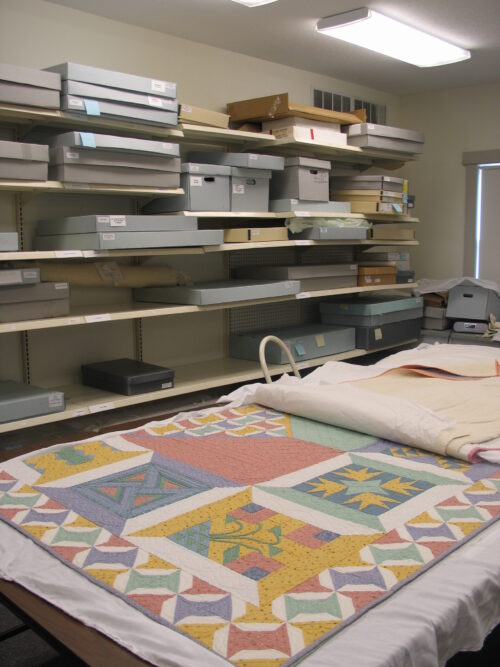 When I first agreed to write this blog, it was with the intention of showcasing The Quilters Hall of Fame Collection: the “stuff” we have in the attic.  But then COVID came along, and I wasn’t going for Collections work days every month, so I switched up to writing about the Honorees which was something I could do from home. Now, Dale, Mary Jane, Regina and I are back on track-with a little help from our friends, and I have some interesting (I hope) things to tell you about.

The big news, which you might have seen on TQHF’s Facebook page or elsewhere, is that we have received a fantastic donation of quilts made or collected by Hall of Famer, Mary Schafer. I wrote a little about Mary last November, and told you that there are many, many Schafer quilts on the Quilt Index.  That’s partly because during her lifetime, Mary donated a large number of her quilts to Michigan State University.  Those quilts have been designated “Collection One” and we now have “Collection Two”, the remainder of her extensive work. An exhibit of all of Collection Two is promised for next Spring or Summer.

Let me take you behind the scenes with this exciting acquisition. Mary’s granddaughter, who had a close connection with Mary, was moving to Florida and decided it was time to end her stewardship of the collection. She contacted us and offered the quilts and we were thrilled to have them. Things went very smoothly in the end, but there were some issues along the way.

We knew that we don’t have room to keep all 100+ quilts in the climate-controlled Collections room on the third floor, so we had to decide what we could take. Dale Drake did a marvelous job of triage, but hard decisions had to be made. It’s difficult to determine from a picture alone which quilts are high priority to keep; color and condition often don’t photograph well. (As it turned out, condition was rarely an issue because, even though Mary herself stored the quilts in egg cartons in her basement, her granddaughter had kept the larger ones flat on a bed, and most were in very good shape.) Here’s a shot of Mary’s first quilt, Rhododendron, which shows its age, but is going to stay with us because of its historical significance—not to mention its pleasing motif.

Then there was the question of which full-size quilts were most representative of Mary’s work. A first quilt, like Rhododendron, was an obvious choice. And then the first quilt Mary designed. And then some samples of her particular style (she’s noted for taking a simple block for the quilt center and adapting an element of the block for the border). We all drooled over a medallion quilt, The Harvesters, and then there was a second medallion that looked pretty good too. But what about the medallion that was Mary’s foray into broderie perse? The rest of the committee thought three medallions was more than enough, but I lobbied heavily to include the Welsh medallion. I’m glad I did because when we saw it on the table, we all realized it’s an excellent example of the Welsh style and has a typical, charming color scheme—a good contrast to the other medallions. Here’s Harvesters and “my” Welsh one.

We had to make selections (I almost said “cuts”, but that’s a scary word when it comes to quilts) among the crib quilts, but we decided we could keep all of the doll quilts—they don’t take up much room. We told the family that we would find good homes for the quilts we can’t keep, so watch for an announcement of a sale following the exhibit of all of Collection Two (probably not before Summer 2022, but keep your eyes peeled because there will be some wonderful items).

Next, there was a logistics problem: how to transport over 100 heirloom quilts from the Ann Arbor, Michigan area to Marion, Indiana? Should the Collections committee drive up and retrieve them, incurring travel and lodging costs? Did we know someone in Marion with a camper who could fetch them back and keep them close the whole way to their new home?? Should we hire a fine arts mover who would drive straight through and not risk having the quilts sit in a motel parking lot along the way, but who would charge three times the fee of a regular mover??? In the end, Mary’s granddaughter and her husband delivered the quilts.

But that still left us unloading the U-haul and getting everything inventoried. Lots of steps were taken bringing the quilts into the Honoree Parlor on the first floor of the House. After a quick pizza break (all hands washed carefully before returning to the quilts), we had everything cross-checked awaiting photo-taking the following day. Photography was set up on the second floor, so that meant shifting everything up one flight. It took four of us a good nine hours (we did stop for lunch and dinner) to get a shot of each quilt, front and back and usually a detail of the quilting or interesting fabrics. And once the pictures were taken, everything had to go up one more flight of stairs to be laid out for cataloging and storage.

Along with the donation of quilts came the remaining contents of Mary’s sewing room: two sewing machines, slides—hopefully of quilt-related scenes, but maybe just vacation shots– with three different kinds of projectors, bags of notions, an entire box of clothing patterns (Mary made garments before she started quilting), fabric including bark cloth curtains, and a fair amount of correspondence (Mary participated in Round Robin pattern exchanges and wrote often to other Hall of Fame Honorees).  Of course, all of this was mixed in with church bulletins and auto oil change brochures, so another volunteer spent all day sorting out the obvious “chaff”. Who knows how much of the remaining “wheat” we’ll keep? It will all have to be photographed, measured and described, and that data entered online.

If you are in the Museum business, all of this probably sounds familiar to you. I’m still new to the “game” and enjoying the learning process, and appreciating the opportunity to see such wonderful objects up close and personal. I hope you’ve gotten a glimpse of what goes on behind the scenes when a donation is made. It’s lots of work, but willingly done at TQHF by a group of dedicated volunteers: the Collections work group and members of the local Marie Webster Quilt Guild.

If you’re still reading, I’ll tell a tale on myself with regard to another donation. In 2019, we received a large plastic bin of items from the shop of our first Heritage Honoree, Mary McElwain. With COVID looming, I offered to take everything home with me to catalog. As I said, I’m new to this, so it’s been a learn-as-you-go process, and not always successful.

When we accept a donation, we assign it an acquisition number, and every object in that group gets its own object number. These are the numbers that organize our online Collections catalog. (You can access Past Perfect from TQHF’s webpage by hovering over the tab labelled “About The Quilters Hall of Fame” and then clicking on “Collections”.) Then each object is described, photographed, and measured; condition and provenance are recorded; and location within the Museum is entered (because there is no way we can remember where we put each item).

So, here’s one of the objects I was working on.

I knew it came from the McElwain shop in Walworth, WI (by a circuitous route involving two successor business owners), and I thought it was a grouping of cardboard templates.  Remember, McElwain was in business before rotary cutters, so women often used heavy paper to trace shapes for cutting. So, I dutifully and laboriously separated the pieces into like shapes and proceeded to catalog them.

There were over 50 of them, and I was up to “bbb” in the sub-numbering. This work can be tedious, but it’s important to be accurate—or so I’ve been told.

Well, the joke was on me because when I came to this next object, I saw my error.

This shows pre-cut pillow kits in “The Laurel” pattern. You can see that the fabric came in a stack between two pieces of cardboard secured by a rubber band. Those cardboard shapes that I thought were templates were merely packaging used to protect the fabric pieces in the kit. We decided to keep the packing where it was part of a kit and to discard the extra unused pieces. All that work for nothing! Well, not for nothing; I learned a few lessons: not every object is worth saving for posterity and figure out what you’ve actually got before you start trying to catalog it.

The good news is that after working my way through nearly 40 items, I’m almost finished.  Everything will soon be up on the internet and you’ll be able to browse through McElwain’s inventory almost like it was on Amazon—or Amazon with a historical filter.

I’ll be finishing up on my writing about the Honorees in short order; just a few left because I’m not going to do the most recent inductees (too soon for an update) and I’m also going to skip the ones I know personally (too much like gossip). After that, I’ll take up my original purpose again and tell you about the Collection.  I hope you’ve enjoyed this first Collections installment. 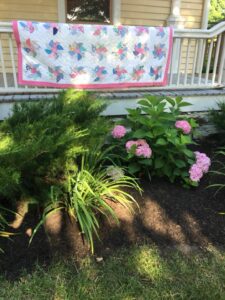