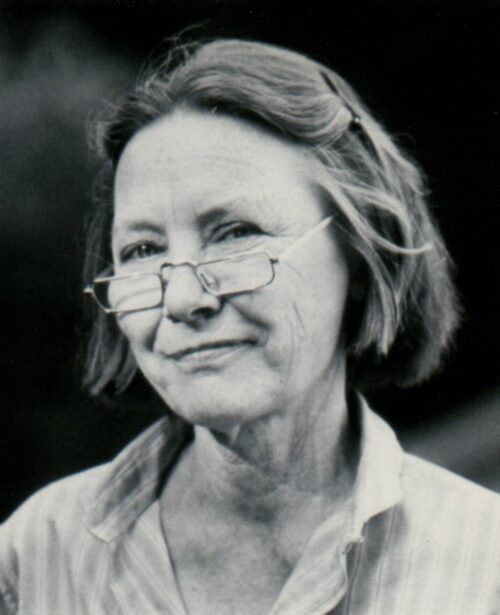 Before I get to Sally Garoutte, I have a follow-up to do. I promised to keep you posted on the International Quilt Museum’s retrospective of the 1971 Whitney Museum “Abstract Design in American Quilts” show.  You’ll remember that the original show was mounted by Hall of Fame Honorees Jonathan Holstein and Gail van der Hoof, and at the time it rocked the art world by showing quilts as modern art. We’ve come a long way since then, but it’s always good to go back to the beginning. Here’s an iconic example from the original exhibit.

Over the next several months, IQM will have four exhibits, each exploring a different aspect of the show: Abstract Design in American Quilts at 50, Raising the Profile, New York Nexus, and Journey to Japan. There’s a link below to the current exhibits on the IQM site; scroll down and select any of the four exhibits, and that will take you to a page where you can link to descriptions of each quilt in the exhibit, photos of the quilts on display, and even a 3-D tour of the exhibit in the IQM. There’s so much to see from the comfort of your couch, and so much to think about. Or, if you’re lucky, maybe you can catch one of the exhibits in person. Either way, be sure to mentally thank Jonathan Holstein and Gail van der Hoof for their foresight; Happy 50th Anniversary, “Abstract Design”!

And the Whitney exhibit also provides the tie-in to this week’s Honoree, Sally Garoutte. You can read her full bio at the link below, but I’ll focus on her quilt story (and a bonus). While the “Abstract Design” exhibit was up on the East Coast, Sally was in California turning her studies in silk screening, color and textiles into a special interest in quilts. With fellow-Honoree Joyce Gross, Sally founded the Mill Valley Quilt Authority, (one of the early groups to promote quilting and the preservation of quilts).  Sally and Joyce collaborated over many years, publishing Quilters’ Journal and founding the American Quilt Study Group. On the left is a photo from 1986 AQSG Seminar, with Sally front and center; she’s flanked by other notables who look a little different today. You may not recognize Barbara Brackman and Julie Silber, but Bets Ramsey is ageless. The photo on the right shows quilt documentation at the first AQSG Seminar in 1980; I won’t attempt to identify people from behind, but do you know what the quilt block is? But note the woman wearing a vest with a similar quilt block vest—fashions change, but quilt study carries on.

Sally was the editor of Uncoverings, AQSG’s annual publication of members’ research papers, from its founding through 1986, and co-editor in 1987. She herself contributed articles about Hawaiian textiles, Marseilles quilts, and an 1846 California quilting party.  The list of other writers during her editorship includes many Hall of Fame Honorees: Barbara Brackman, Merikay Waldvogel, Virginia Gunn, Joyce Gross, Cuesta Benberry, Bets Ramsey, and even Florence Peto. You might also recognize Judy Mathieson of Mariner’s Compass fame and Joe Cunningham who, pre-pandemic, was teaching his improvisational style to guilds around the country.

But Sally didn’t take all comers. Even articles by famous persons had to be historically accurate and measure up to Sally’s standards for research. Here’s her thoughts on quilt history:

In an effort to illuminate the history of quilts in America, some early writers unfortunately did just the opposite. Using the writing style of 50 years ago, most historians did not document their sources, and simply stated their theories and surmises as though they were fact…. Folklore, however, is not history. Although we need the lore to understand what people thought and how they felt about things, we need history too. We need to know what happened and what people did, and we need to document it dependably.

In one of her early articles, Sally explains scholarly research:

Simply put, a scholarly paper is the account of research that has been done by its author. Its distinguishing feature is that it is verifiable.It states where and how its information was found, so that any other person can go and look at the same information. An article or paper that does not state clearly where its facts came from is not scholarly. It is a story asking to be taken on faith. It is not verifiable. The reader can only hope that the author has searched factual material before writing her conclusions, as there is no way to check it.

Sally, for all her interest in quilt history, wasn’t a quilter, but there’s still a little to show. This quilt, which appeared on the cover of the 1978 issue of the journal Textile Chemist and Colorist, is the only quilt Sally made.

She also contributed a block to the Cuesta Benberry Friendship Quilt, but I don’t know if she made it or collected it; it looks pieced, but it also could be a print. Here’s the whole quilt with Sally’s block in the lower right corner and a larger version of that block—it’s called “Star on a String”.

The reason I suggest that Sally’s block could be a print is because silk screening was her medium.  So now, here’s the bonus: I’m going to get to show you some things I just helped to catalog for the Quilters Hall of Fame collection. Here are two little quilts, the tops of which were made by Sally; we know that the log cabin was quilted by someone else, but don’t know about the other. There are links below if you want to read the full descriptions.

Also in our collection is a group of screen prints, eight of them showing autos, and six with people in or on the water. These were part of a research project, “Treasures From a Shoebox”, that Sally did when she was at Goddard College in 1974. The original images were family photograph negatives that she found in the attic. Here’s one of them, and there’s a link for the rest. With all but one of the images Sally experimented with different colors of ink or with different background fabrics, so be sure to see them all to get a flavor of her artistic process.

We also have a large undated piece made by Sally and donated by Hall of Fame Founder, Hazel Carter. We don’t know if this was also a college project or a later work, so if anyone has more information, please let us know. This is a large piece, 47” x 66”, and unlike the “Treasures”, it is printed on a heavy fabric, almost like a woven coverlet. I can’t imagine what it would be used for, so I’m going to say it’s “art for art’s sake” (ars gratia artis—you’ve seen that quote above the lion in old movie reels).

Well, that’s Sally Garoutte. I wouldn’t be writing today if I hadn’t attended an AQSG Seminar in Lincoln, Nebraska in 2012 and gotten hooked on quilt history.  And I’m looking forward to this year’s Seminar in the Shenandoah Valley, where I’m sure to see many wonderful old Virginia quilts and many wonderful old friends and colleagues.  I have a lot to thank Sally Garoutte for, and I’m glad to have had this chance to get to know her better.  I hope you feel the same way.

Treasures from a Shoebox. https://quiltershalloffame.pastperfectonline.com/webobject?utf8=%E2%9C%93&search_criteria=%22sally+garoutte%22&searchButton=Search

3 Comments on “If You Love to Look at Old Quilts, Thank Sally Garoutte”