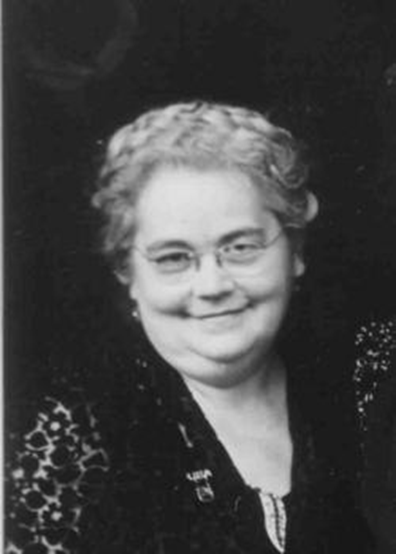 Hooray! Hooray! Yippee! Hooray!  It’s a good thing I’m writing rather than talking because I’d be tripping over my tongue with excitement. I have big news.

A few months ago, I told you about the process for nominating someone to be selected as a Quilters Hall of Fame Honoree. Well, I went through that process last year, nominating Mary Gasperik to be a Heritage Honoree—the category for a person who is deceased or was active in the quilt world at least 80 years ago.  And now the word is out that Mary was chosen and will be inducted in 2021. I couldn’t be more thrilled, but I’ll try to contain myself and tell you about my journey with Mary Gasperik. It all started when I went to the American Quilt Study Group 2012 Seminar in Lincoln, Nebraska.  I had just retired, and was checking things off my bucket list, including a visit to the International Quilt Museum.  I didn’t dream that rather than being a “one and done” trip, this jaunt would open up a whole world of quilt study and travels for me.  I didn’t know anyone there, but everyone welcomed me and treated me with a level of collegiality that I had no reason to expect. One day, I was standing next to Merikay Waldvogel (Hall of Fame Honoree, scholar, and nationally-known expert on the quilts of the Chicago World’s Fair) and she asked what I was studying—as if, naturally, I would have an area of expertise.  I told her that, being from Chicago, I would have been interested in researching the 1933 Sears quilt contest at the Fair, but that she had already covered that ground. Without missing a beat, Merikay assured me that there was plenty more to look into, especially some of the individual quilters. When I came home from Lincoln, I took a look at Merikay’s book and learned that there were Park District-sponsored quilting clubs in 1930s Chicago, and that Mary Gasperik was active in one of them. Here’s a photo of Mary (on the left in the back row) in front of her Laurel Wreath quilt with some of the other ladies of the Tuley Park Quilters.

Something hit a familiar chord when I saw that picture: not only did Mary remind me of one of my favorite aunts, she was also—like me—a South Side girl. Anyone familiar with Chicago knows about the rivalry between the North Side and the South Side. The Cubs and Sox slug it out in their crosstown classic mini-series every year (except this year, with COVID-19), and there are other bones of contention which I’ll tell you about when I write up Bertha Stenge, a Hall of Fame Honoree from the North Side.  Anyway, I decided that Mary Gasperik and I were sympatico. I started learning about Mary indirectly when I prepared a presentation on Alice Beyer who, in her capacity as an “Artcraft” supervisor for the Park District, worked with the Tuley Park Quilters to publish a quilting handbook in 1934. Here’s the cover of the book, with a sample page and the quilt Mary Gasperik made from that pattern.

And, so you’ll get a preview of Mary’s work and start to know why she was chosen as an Honoree, here’s a close up shot of the quilting:

I’m pretty sure this quilt will be at Celebration next year, and you won’t want to miss seeing it in the cloth. And there are some great stories to go with it, but I won’t spoil that for you now.

One of Mary’s granddaughters, Susan Salser, helped me with the Alice Beyer lecture by filling in lots of information about the Tuley Park Quilters, and this naturally included Mary Gasperik.  Susan is a scholar in her own right: she has researched, from microfiche if you can imagine, hundreds of articles about the Detroit News Quilt Club Corner to learn about her grandmother’s participation in the “club”; she has scoured design records to find the sources of images that appear on the quilts; she’s been a keeper of family records related to Mary’s quilting.  And the crown jewel of Susan’s efforts is the fact that every known Gasperik quilt has been documented, in detail and with the help of Merikay Waldvogel, on the Quilt Index.

Well, the more I talked with Susan, the more I thought that Mary Gasperik should be in the Hall of Fame. Her quilts are many and varied, ranging from whimsical to elegant; her workmanship is superb; she even has a quilt on display at the Smithsonian. Her story is worth recognizing: as a Hungarian immigrant with little command of the English language, she assimilated through quilting in the Park District and membership in the Detroit club which required bus trips to participate in their shows. Unlike several other Honorees who had a formal art background, Mary used her untrained eye to adapt published patterns and to create her own original masterpieces. Mary wasn’t a society lady, but she was like so many unsung quilters of her era who just plain enjoyed quilting.

So, let me tell you about the nomination process. Mary Gasperik’s nomination was made in the name of the Northern Illinois Quilt Study Group, my local quilt study group. I had given a Power Point presentation about Mary to the group, and we were lucky to have two other granddaughters bring us some of Mary’s quilts to examine.  These granddaughters also brought family scrapbooks, appliqued clothing made by Mary, and other ephemera. The study group had a great time, and everyone was so impressed that they readily adopted my suggestion to nominate.

There’s a form for the nomination on the website, but it’s really bare bones.  The first part is writing about why the nominee is deserving. Once I had lined up the reasons above, I just had to put down my thoughts. Writing is easy for me, but if you are thinking about submitting a name, don’t let writer’s block worry you; what’s important is the nominee’s merit, not the nominator’s writing talent.

Then you need to gather up a record of supporting evidence—in the case of a quilter, it’s her quilts.  Here’s where I chose well: with all of Gasperik’s work on the Quilt Index, I could get pictures and information all in one place. If you’re going to nominate a contemporary quilter, you might be lucky and find their work on their website or elsewhere on the internet.

The last part is getting references, and this is where I had some nice experiences, rubbing elbows with the big wigs. Shelly Zegart, producer of the series “Why Quilts Matter”, had referenced Mary Gasperik in several episodes, and she was able to use those points again to boost Mary’s nomination.  Merikay Waldvogel graciously contributed by placing Mary Gasperik in the context of the 1930s milieu.  And Marsha McDowell wrote a nice letter about the significance of having the Gasperik collection online at the Quilt Index, and of recording family legacies in general. Susan Salser added to the backup with a reference from the woman who had coordinated a museum exhibit of Gasperik quilts, and quilt historian Karen Alexander also gave a reference.

If you’ve ever thought “So-and-So should be in the Hall of Fame” or asked why a certain prominent quilting personality hasn’t been named, the answer may be that no one has made a nomination of that person yet. The Hall of Fame relies on you to bring a name forward—you can do this. I’m here to tell you that submitting a nomination is a little like herding cats, but it’s well worth the effort. You’ll learn a lot, meet some interesting people, and (almost as an aside) maybe your efforts will pay off with a selection, and you can come to Celebration to see your nominee honored.

I know where I’ll be in July 2021 (pandemic permitting), and I hope I see you there—in Marion, welcoming Mary Gasperik into the Quilters Hall of Fame.

Link to the Nomination form on The Quilters Hall of Fame website: https://quiltershalloffame.net/honoree-nomination/