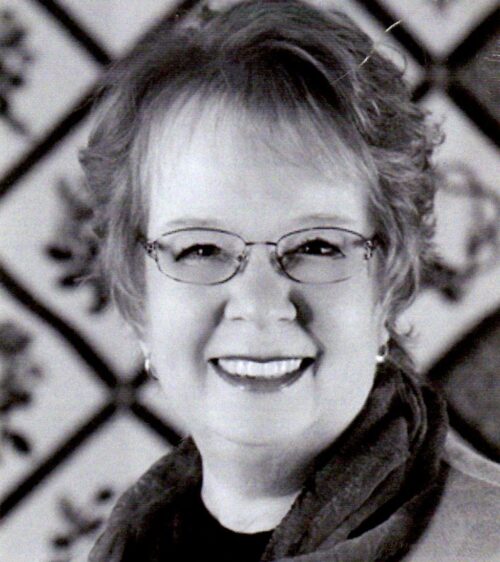 When I first started quilting, my guild buddies talked me into taking a workshop to learn how to appliqué. Even though I was–and still am—drawn more to geometric rather than organic shapes, they suggested that I should have this skill in my wheelhouse.  Having heard other piecers refer to appliqué as the ‘A’ word”, I wasn’t convinced. When I resisted, they brought out their ultimate argument, “You never know when you’ll need to slap something on to cover up a poorly joined seam”.

I signed up, needle-turned a leaf and stem, made a charming ruched flower, and never finished the project. In fact, I just recently tossed it out in the Great Covid Cleanup. But over the years, I have come to terms with appliqué, and even enjoy it in small doses. Here’s my largest hand appliqué project. I’ve also just finished two tops with appliqué or broderie perse borders, and if I remember, I’ll show you photos when they come back from the quilter.

So, not too shabby for someone who was dragged kicking and screaming into appliqué, but I wonder what my attitude would have been if I had known Mimi Dietrich in my quilting salad days? Well, it’s never too late to find out.  Mimi Dietrich, the Pride of Baltimore (quilting, not the ship), will be teaching in The Quilters Hall of Fame Virtual Celebration which starts this week. But let me tell you about her before I give you info on the class.

Mimi is a Baltimore native and graduate of the University of Maryland.  It’s no wonder she specializes in Baltimore Album quilts. She is the author of numerous books, including “Baltimore Basics: Album Quilts From Start to Finish,” “Baltimore Blocks for Beginners: A Step-by-Step Guide” and “Baltimore Bouquets: Patterns and Techniques for Dimensional Appliqué” . She has taught for Craftsy and for University of Maryland and was named Teacher of the Year by the International Association of Creative Arts Professionals. Here’s the little quilt she donated to the Hall of Fame when she was inducted:

Earlier this year, Mimi was featured in the Hometown Girl exhibit at the Maryland Historical Society with quilts made by her and her students. It’s over now, but here are two of her quilts that were on view, a classic applique and a quirky conglomeration (“Pun Quilt”).

Seeing them together, you wouldn’t guess they are made by the same quilter, but it shows Mimi’s depth and sense of humor. If you would like to see more about this exhibit, there’s a link below to Mimi’s “Farewell Tour” in which she describes the sections of the exhibit and talks about her Top Five pieces.

Mimi has a long-standing association with the Maryland Historical Society (MdHS) eginning in 1993 with the exhibition, “Lavish Legacies: Baltimore Album Quilts, 1845-1855,” when she lectured and gave a workshop. In 2001, she and members of the Baltimore Applique Society (BAS) prepared quilts for the MdHS exhibition “The Baltimore Album Quilt Tradition.” Between 2011 and 2015, Mimi was a key member of the volunteer group that catalogued and rehoused the MdHS quilt collection. Additionally, in 2014 she was chosen to applique the stars on a reproduction Star Spangled Banner and lead 200 volunteers in the effort. A real Hometown Girl! And a reminder to us all that our local museums and historical societies could use our help and quilting expertise.  Mimi is so well-regarded by the MdHS that they consulted her about a special 1840s red and green applique quilt in their collection.  There’s a link below to a video of Mimi sharing her knowledge about the quilt.

Don’t you wish you could learn applique from someone as skilled and knowledgeable as Mimi Dietrich?  I’d like to talk my guild into having her come to us when the pandemic is under control.

In an ordinary year, there would be lectures offered in conjunction with the July Celebration, but this year we’ve had to punt, and Mimi Dietrich has graciously stepped in to help.  Even though it won’t be the same as an in-person class, you can still learn from Mimi in a virtual format.  Join her on July 14th at 10:00 EDT (details coming to the Hall of Fame website) and see how she creates her beautiful applique. You won’t be calling it the ‘A’ word anymore.

And if you would like to own an original piece by Mimi Dietrich, you can try to win this beauty in the Quilters Hall of Fame online auction.  Bid at https://www.benefitbidding.net/auctions/listings/details.cfm?item_id=121839

Before I go, I want to wish a belated Happy Birthday to Honorees Michael James (June 30) and Eleanor Burns (July 3).  I’ll tell you about Eleanor next week because she also has a Celebration activity coming up, and Mr. James will go onto my random rota. In the meantime, here’s a virtual card for them both.

6 Comments on “Yes, You Can Say the ‘A’ Word, if You Appliqué with Mimi”