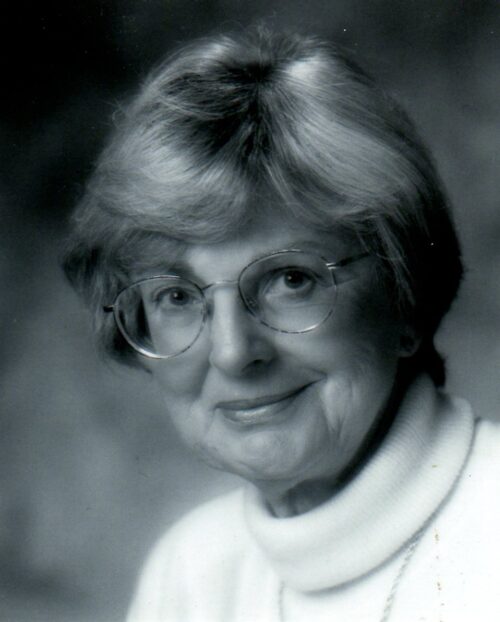 I don’t know about you, but January is a time for me to draw in, reflect, and simplify. This has become especially true this year since the pandemic is still limiting my social life and activities. So, I’ve been thinking about quilting in the days before we had so many gadgets and tools, and that led me to Honoree Georgia Bonesteel.

Georgia’s quilting career spanned the time when TV shows and video tutorials were the rage. (Now we just go to the internet.) She started with crazy quilt handbags as a guest star on Sewing is Fun, a local New Orleans show, and went on to have her own PBS series in 1976.  By 2003, she had made twelve more 13-part series. She really enjoyed combining quilting and teaching. You can read more about Georgia’s life in the bio link below, and you can find many of her segments on YouTube.

I watched the first video she ever made, just to get a sense of her as a person for writing this blog. But guess what? I picked up a few pointers which I’ll be trying on my next big project (Edyta Sitar’s Alaska quilt, which uses templates). You can watch it at the link below.  Sometimes it’s good to go back to the basics.

She has also authored a number of books based on her “lap quilting” method: piecing and quilting small sections and then sewing the quilted sections together at the end. It was innovative when she introduced it, and as her last volume says, it still “lives”.

Take a look at the quilt on the cover of “More Lap Quilting” (top row, middle).  Here’s the original quilt which is now in the Quilters Hall of Fame Collection. You can view closeups of this quilt and read why Georgia “cherished” it at the link below.

Georgia has been a good friend of the Quilters Hall of Fame, and a regular attendee at our Honoree Celebrations each July. In 2004 her son, Paul, recorded video footage of the grand opening of the Marie Webster House.  The following year, Paul turned the video into a film for PBS featuring Georgia’s quilts and telling the story of quilting from Webster forward.  It also includes great views of the Hall of Fame, along with an interesting panel discussion among Honorees Barbara Brackman, Joyce Gross, and Cuesta Benberry along with quilt historian Connie Chunn.

“The Great American Quilt Revival” is sold out in Georgia’s online shop, but it’s still available through The Quilter’s Hall of Fame. Here’s the link to the store: https://shop.quiltershalloffame.net/t/georgia-bonesteel . If you use the code “BONESTEEL” when you order, you’ll get a 20% discount on any one Georgia Bonesteel item. And you might find some other things to purchase while you’re there.

We are also privileged to have several other objects from Georgia in our collection. One of my favorites is a wall hanging titled “Three Banners: The Street Where Quilters Live”. It was made by Georgia and some of the famous quilters she met while producing her TV shows.

It depicts an imaginary house for each of 36 quilters, most made by the quilter, and three made by Georgia in addition to her own, where she supposed they might live according to their respective quilting styles. I love the fact that she took the time to reflect on their personalities and to put some individual element into each block. For example, you may remember from my April 4, 2020 blog about Virginia Avery that she was not only a quilter, but also a jazz musician.  Here’s her block showing “Sunday Jazz at Folly Farm”.

And here’s one that uses the Seminole piecing which Cheryl Bradkin was noted for. There’s a link below if you want to see more of the blocks.

I don’t know whether Georgia Bonesteel was the first to make this kind of album quilt—a step up from “signature”/ name-inscribed quilts that have been around since the 1840s– but she wasn’t the last. Our 2021Quilter’s Hall of Fame Inductee, Marti Michell, assembled a similar quilt representing many quilters (not houses, but each block represents the quilter in some way.) Here’s the block in Marti’s Silver Star Friendship quilt made by Cheryl; it’s the cover of her Seminole piecing book.

Here’s another example of a Bonesteel group quilt with components made by all of the teachers on a quilting cruise. This one is also in The Quilters Hall of Fame collection. Check the link below to see who the teachers were. I think Doreen Speckman must have made the “Peaky/ Spike” block in the lower right sail; do you agree?

Like many of us, Georgia Bonesteel started sewing clothing for herself and her family.  And once she was into quilting, she didn’t forget her garment-making roots.  She participated in the Fairfield Fashion shows (see my Jean Wells blog), and donated several items of clothing to The Quilters Hall of Fame collection. She gave a four-piece ensemble comprising a dress, belt, vest, and (yes, you’re seeing that right) cover for her Bernina machine.  The title? “Have Machine, Will Travel”.

Her gift of the “Harbor Light” group represents the flame of the Statue of Liberty’s torch. And the final item, just identified as “Jacket” is the most sophisticated of the collection.  You can read full descriptions and see more pictures at the links below.

These are the pieces we’ve kept for TQHF’s collection. Our storage space is very limited, so we’ve culled a representative bit and have passed on the rest to The International Quilt Museum in Lincoln.

I’m going to backtrack a little and return to books because Georgia has continued to write. And her more recent ones are often self-revealing. Do you see the bird on the black quilt on the cover of Quiltmaking Legacy? As of 2014, Georgia has kept chickens at her house, and is a member of the Hendersonville Hen Society.  And I know the block on the lighter quilt has a different name, but in this context, I can’t help thinking of rooster combs.

And here’s Georgia’s most recent effort in which she shares family history and gives you a peek at her furniture. I have to admire someone who is so willing to share not only her technical expertise but also her personal information. Quilters are reputed to be giving, but we’d be hard-pressed to find one more generous than her.  Thanks, Georgia Bonesteel.

First video. Georgia said, “This instructional video was produced in 1988 by Oxmoor House publishing and sponsored by Bernina USA. This was the first (and only) VHS video created to teach my “lap quilting” technique outside of the PBS studios of North Carolina Public TV. This video teaches how to make three quilts including the “Carnival” “True Blue” and “Garden Party” quilts.”https://www.youtube.com/watch?v=eeU6in3nHog&feature=share&fbclid=IwAR1S9CJqIRpDdgFI6uPR3MWYPrGUES8qBJDMgFK6SCbdAG4x7FmhW_pdblU